“Please rain,” I wrote earlier this year. We got rain, alright. This past May was one of the wettest on record. The Capital Weather Gang reported more than 10 inches of rain in a 23 day period. There was a lot of flooding in the Potomac basin.

Not that I was around to witness it; I was traveling. But the clues are still there: deposits of debris, dried mud on the upslope side of the Billy Goat C trail, muddy tree leaves six feet off the ground, that sort of thing. I saw them this morning when I went out to have a look at my favorite bedrock terrace, which I call the hotspot.

the hotspot pond, 10 June 2015; note how lush, with arrowhead in the water

My usual path to it, across a narrow channel, was still underwater, so I went to another low spot and was able to get across via an islet.

The islet was almost empty: only a few plants, maybe a foot tall coming up through the freshly deposited dirt, no more than one plant per square meter. Big piles of woody material, downed trees, shrubs, and vines on the upstream side of boulders and large trees. Lumber. Plastic and glass bottles. A child’s flip-flop shoe. 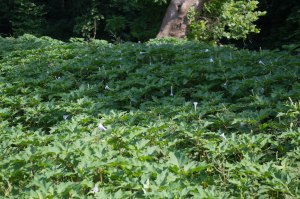 I’ve never gone through that area because by this time of year, it’s waist-high or taller in jimson weed.

The hotspot was almost empty, too. A few nodding onion on the higher rocks. Racemose goldenrod starting to grow. One small clump of big bluestem grass blooming. Remnants of trumpet creeper and poison ivy. A few scraggly shrubs that might be buttonbush. Very little else.

One of the delights of the hotspot is a pond that’s tucked into the rocks, well above the river. The pond supports aquatic plants, and wetland obligates grow next to it. This year, that little pond held more water than I’ve ever seen in it, but nothing green. The rocky edges were crusted in dried mud. No plants.

the hotspot, 18 July 2017; note how low the water in the pond is, but the area is still lush; zoom in to see flowers on buttonbush and milkweed

Last July in that area I saw flowers on buttonbush, wild potato vine, swamp milkweed, Carolina horsenettle, water willow, thin-leaved sunflower, swamp candles, common arrowhead, fogfruit, and nodding onion. Seedpods on wild blue indigo, and buds on Culver’s root. Halberd-leaved rose mallow taller than me and budding up. Same with joe-pye weed. And cardinal flower. And leafcup and cut-leaved coneflower. Honeyvine climbing over everything, not yet blooming. There was a middle-height forb I identified later as Ludwigia decurrens, the first report of this species in Montgomery County.

This year, on the riverbanks near the hotspot the rosemallows are starting to regrow. Leafcup, coneflower, and sunflower are as well, but they’re only about a foot tall. There’s some water willow in the river. I couldn’t find a trace of any of the other plants: no joe-pye weed or wild blue indigo or Culver’s root or cardinal flower. No honeyvine.

I’m devastated. I won’t get to see those nifty flowers this year.

The hotspot, however, was not devastated. This sort of flooding is part of the natural rhythm of the Potomac; the river’s occasional scouring of the bedrock terraces is one of the factors that allows unusual plants, and unusual plant communities, to thrive there. I have no doubt that all the species I mentioned above will be back next year (unless it floods again), in all their glory. And maybe the river will have brought something new.

check the archives for July, 2017, for pictures of plants growing in the hotspot: Golden Glow, Bewitched by Buttonbush, Common Arrowhead, and Ribbet