Saturday morning: Steve and I are hiking on Sugarloaf Mountain, and I’ve just shown him some downy rattlesnake plantain, almost finished blooming. As we continue walking along, I tell him to watch for something that looks like thin twigs sticking up out of the ground, with little purple-brown flowers all over.

Not three seconds pass before he says “you mean like this?”

I try not to write about the same plants every year, but when it comes to cranefly orchid (Tipularia discolor), I just can’t help myself. Nor can I put into words what makes this plant stand out for me.

Maybe it’s that pearlescent lower lip. Or the purple stripes on the green sepals and petals.

Maybe it’s the overall effect of those twisted, delicate flowers dancing above the ground.

Cranefly is hibernal: the plant’s single leaf emerges from the ground in autumn, grows through the winter and spring, and dies back in early summer. A leafless peduncle emerges a few weeks later (around early July in the Maryland Piedmont), and the flowers open roughly three weeks later. 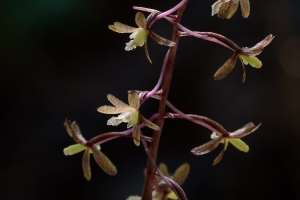 Early morning is a good time to shoot them.