Next in the series of posts on composite flowers lacking ray florets is blue mistflower. Like the joe-pye weeds, blue mistflower was once placed in the genus Eupatorium, but nowadays it’s known as Conoclinium coelestinum. The flowers are somewhat similar in appearance to joe-pyes, the heads of tightly clustered disk florets with long protruding styles giving the inflorescences a fine, feathery, misty look. 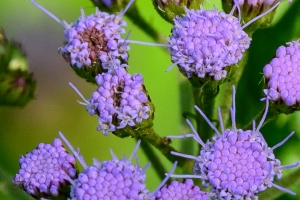 Speaking of the Potomac, I went back out to check on the spot I reported on last week, a place where in other years I would definitely find mistflower. It was all underwater again. Lots of rain upstream.

Blue mistflower ranges mostly along the Mississippi River basin and its tributaries, from southern Illinois south, and also in the eastern mid-Atlantic and the Carolinas. It’s found in most of Maryland except for the westernmost and easternmost parts of the state.

Apparently these flowers are a great nectar source for a variety of butterflies, but I haven’t seen many on it. Three years ago I wrote that I was worried that the blue mistflowers in my garden would become weedy*. “Weedy” is, of course, in the eye of the gardener. They certainly have spread, somewhat aggressively, and I’ve had to pull some out, but they haven’t reached weed status yet.