While doing photographer’s yoga trying to get decent pictures of princess pine, I happened to spy something different. Carefully making my way down a wet slope, then squatting and bracing against a beech tree, I was able to photograph several clumps of this plant: Huperzia lucidula, commonly known as firmoss or shining clubmoss.

Like the Dendrolycopodium in my last post, firmoss is a vascular plant that reproduces via spores rather than seeds, and is in the Lycopodiaceae.  It ranges across the eastern US, in wooded ravines and hillsides and other shady, moist places with plenty of leaf litter.  It grows in clumps, with the vertical stems reaching no more than eight inches tall.

This plant is completely new to me, made more exciting because I found it in freaking January.

overhead shot; beech leaves on the ground give a sense of scale

the “cone”, properly known as a strobilus, which contains the spores

Commonly known as ground pine, or princess pine, or clubmoss, it isn’t a pine, nor a moss. Vaguely related to ferns (in that they reproduce via spores rather than seeds), these primitive plants are covered in simple, single-veined, needle-like leaves. A plant consists of an underground stem with vertical shoots that seldom exceed twelve inches tall. 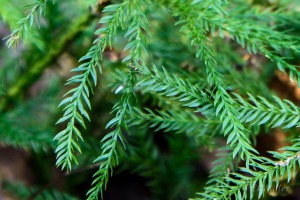 look how tiny those leaves are! no more than a quarter of an inch long

There are four species within this genus, three of which can be found in eastern North America. According to BONAP and the Maryland Biodiversity Project, only one of those species is found in Montgomery County, and for that reason (rather than properly keying out a specimen), I’m calling this one Dendrolycopodium obscurum, which in addition to the above names is also called flat-branched tree clubmoss.

This species seems to be found mostly in the upper Midwest, New England, and the Appalachians. It’s rare in Indiana and exploitably vulnerable in New York. It likes moist, acidic soils in woodlands. As I wrote a few days ago, I found an extensive stand on a slope near several species in the Ericaceae, which as a rule of thumb like acidic soils.

This isn’t a rare plant, but it’s unusual to find a big stand of them. This is a good time of year to look for low-growing evergreen forbs. And if you’re a geek like me, you’ll geotag a picture so you can find them again.

While out looking for something green (other than Christmas fern and rock polypody), I found marginal wood fern.  “Marginal” not because it’s insignificant, but because the sori are located along the margins of the pinnules.

sori along the edges of the pinnules

Marginal wood fern is widespread across the eastern US and Canada, except in Iowa and Minnesota, where it’s threatened.  New York lists it as exploitably vulnerable.

Like so many ferns, it likes a damp habitat.  In the Maryland Piedmont look for it in ravines and rocky slopes.  I found dozens of them clambering over cliffs at the edge of Cabin John Creek, in an area that’s always wet from seeping groundwater. 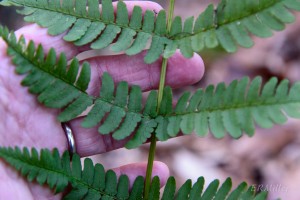 After two weeks battling a sinus infection, I finally felt well enough to go for a hike. Well, more of a walk. As I’ve written before, the Cabin John Trail is treacherous: an over-used trail with poor footing in many places. But, I almost always find something worthwhile, if I take the time to poke around and really look at things.

And so it was yesterday. I knew I’d find a lot of Christmas fern, but went with the goal of finding something else – and I did, after scrambling about in a dryish seasonal watercourse. Look for a post about that fern in another few days.

After that I went to a section I call Erica Alley. It’s a very rocky slope with a high concentration of mountain laurel (Kalmia latifolia), and big stands of rock polypody. There I found several small stands of spotted wintergreen (Chimaphila maculata, another ericaceous plant), which thrills me because I failed to find it near Carderock this year. And then, poking about, I found something completely new. And something old that required re-inspection.

I don’t carry ID books with me. Whenever I have a book, I end up plopping my butt down and reading for 20 minutes. I’m too easily distracted by “dictionary syndrome”. So I take pictures, but often fail to get the right pictures for a definitive ID. At least I’ve narrowed them down to the correct genus. Perhaps if the weather’s good today I’ll go out again, this time with the ID books, dammit.

If you see a middle-aged woman reading a book on the Cabin John Trail, say hi.

a small stand on the Cabin John trail

This little fern is no less charming for being incredibly common.  It’s found throughout most of the eastern US and Canada except for parts of the deep south.  Although short (the fronds are usually about twelve inches long), the rhizomes will form massive colonies in suitable habitat, which consists of all sorts of rock outcroppings and rocky soils in moist shade.

an itty-bitty specimen at Carderock; it doesn’t have much soil to grow in!

It’s also an easy fern to identify, especially at this time of year, since it’s evergreen.

new fronds in late April along the Cabin John trail