You may have noticed that for each plant I always provide the proper scientific name, by which I mean the internationally agreed-upon binomial or Latin name. This is to avoid confusion, because common names for one plant can vary by region and country.  For example, any one of the 76 or so plants in the genus Desmodium can go by the name beggar-ticks, beggar’s-ticks, beggar’s-lice, beggar-lice, sticktight, tick-trefoil, tick clover, hitch hikers, and probably others. But if I write about “Desmodium canadense“, there will be no ambiguity.  There is only one species with that name. 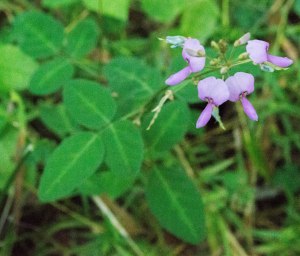 Worse, the same common name can be used to describe plants that aren’t even in the same family.  “Bluebell”, for example, is used for plants in the genera Campanula, Eustoma, Hyacinthoides, Mertensia, Muscari, Phacelia, and Wahlenbergia*.  That is about 1,000 different species of plants!  And plants in the genus Campanula are also known as “bellflower”…

But the thing that really drives me nuts is the misunderstandings about binomial nomenclature itself, so here’s a little primer.

1. The two words in a binomial name are the “genus” and the “specific epithet”. Together, they make up the species.  For example, in Cornus canadensis, “Cornus” is the genus, and “canadensis” is the specific epithet.  So please, don’t ever say “genus and species”.

Wrong: “what genus and species is that flower?” 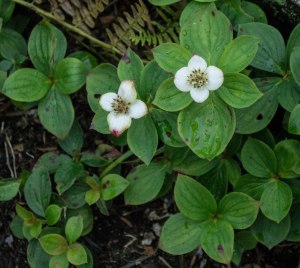 2. The specific epithet is never capitalized, even if it derives from a proper noun or adjective.  Therefore, it’s wrong to write Mertensia Virginica even though in standard English we would write it as Virginia mertensia or mertensia of Virginia. 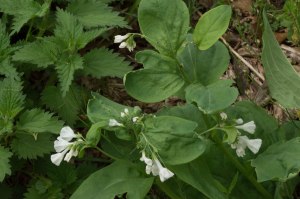 Mertensia virginica white form, aka Virginia bluebells – so much for common names, they’re not even blue!

3. The genus is always capitalized.

4. The species is always written in italics (unless you’re on a lame site like facebook that won’t let you do italics, then you have no choice). 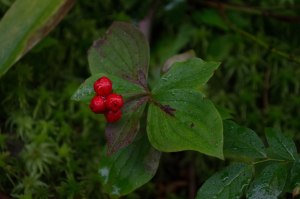 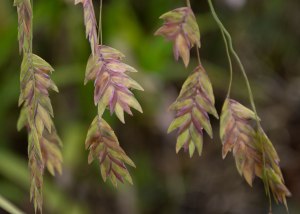 I may have to retire “Flower of the Day”, as there are fewer species of flowers in bloom now.  But plants in fruit and seed can be lovely, too. 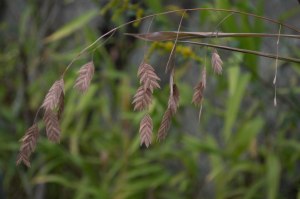 Northern sea oats is widespread in the open areas and not-too-deep woods of the Potomac gorge.  The plant grows to about 5 feet tall, with arching stems and drooping spikelets.

To my amazement and dismay, I went this whole season without getting a decent picture of it in bloom, though it blooms from May through August.

Its native range extends from Arizona to Pennsylvania, and in the midwest somewhat further north to Michigan, where it’s listed as threatened.  The plant is only distantly related to the edible common oats (Avena sativa).  Once again I’m going to rant a little about the uselessness of common names.  This is a southern, inland species of grass that isn’t an oat, so how did it get the moniker “northern sea oats”?!

Woodoats makes a lovely garden plant, though it can be aggressive.  Grasses don’t get the respect they deserve from home gardeners.  If you’re interested in the subject look up Rick Darke’s The Color Encyclopedia of Ornamental Grasses, (Timber Press, 1999) once known as the authoritative guide.  While looking up that link I learned that he’s since published another one, even more comprehensive.  Uh oh, looks like I’m heading to the bookstore soon. 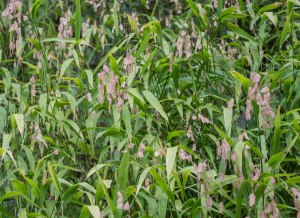 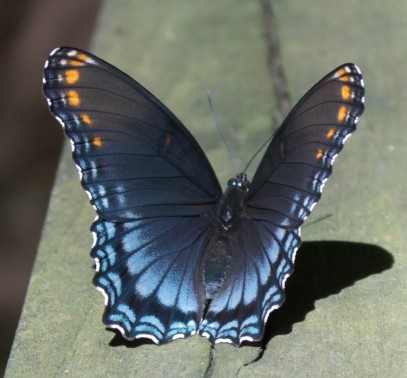 Limenitis arthemis astyanax kindly posed for me on this bridge rail. 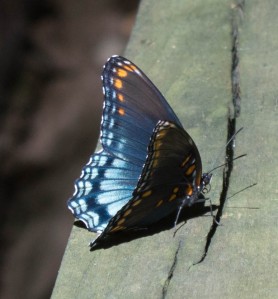 Here it is snacking on an apple core: 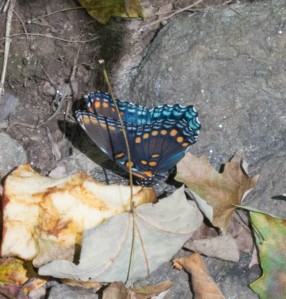 I am running out of material for Flower of the Day!  I have at least five different asters photographed, but I haven’t figured out which species they all are yet…

It appears that one of my mystery goldenrods is Solidago racemosa.  This might not interest you much, but it interests me because although it is a rare plant throughout its range, it can be found pretty readily along the rocky bluffs of the Potomac gorge. 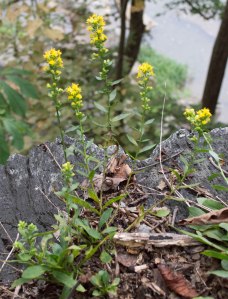 It’s a compact plant, only growing a foot or so tall, with leaves both on the stem and forming a basal rosette.

Although S. racemosa has several different common names, none of them are commonly used.  It’s gone through several botanical name changes, too, formerly known as  S. simplex and S. spathulata.

Just about everything you’d care to know about the Solidagos can be found in the goldenrods section of the Astereae Lab web page of the University of Waterloo in Canada.

S. racemosa is endangered in New York, Massachusetts, and Pennsylvania; threatened in Tennessee; and of special concern in Kentucky. 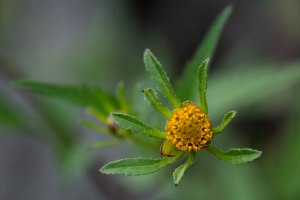 At this time of year the asters are just about the only things blooming in the Potomac gorge.  This one is comprised entirely of disk flowers; the rays absent. The green parts surrounding the flower head are bracts. 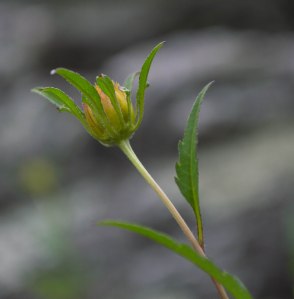 According to the USDA, there are 26 species (one of them alien) of Bidens found in North America.  Another one is Spanish needles, fotd 9/12.  This one is probably the most widespread of them.  It prefers moist soils and full sunlight but can tolerate some dry and shade; it’s prone to becoming a nuisance plant. While looking into the origin of the common name I tripped across a New Zealand website that featured it as Weed of the Month. 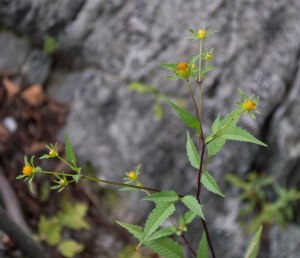 The common name comes from the fact that the seeds hitch a ride on the fur (or clothing) of passing animals.