I was walking on a wet towpath. So many mosquitoes. Their little whining buzzing was continual, and too close to my ears. Their attacks were continual. It was so humid, I sweated off the first coat of Ben’s 100 in 20 minutes, and took to walking with the bottle in hand. I hate putting poison on my skin, I hate strong odors. Why was I doing this?

To find a plant, of course. Recent reports of a giant hogweed (Heracleum mantegazzianum) sighting in northern Virginia has led to a bit of a media frenzy, which reminded me of the walk I took with a friend last April. She had pointed at some very large leaves and asked, “what’s that?”

I didn’t know, but figured it for something in the Apiaceae, so I took a few pictures and looked it up later. Turned out to be cow parsnip, Heracleum maximum, a close relative of the plant everyone’s been fussing about. 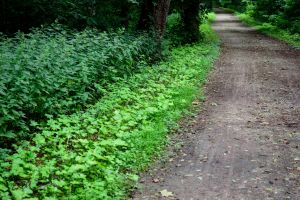 So there I was, enduring the mosquitoes. I found the plants, a nice stand of them, but sadly they were done blooming. Also they were largely guarded by walls of stinging nettles, so I’ll admit it: I didn’t even try to get good pictures. I got as close as I reasonably could, got a few shots, and then got the hell out of there.

I really can’t overstate just how thick the mosquitoes were.

At any rate, cow parsnip, which is listed S3/watchlist in Maryland, is easily confused with giant hogweed. There have been a few sightings of the latter in recent years, but I understand that those plants were reported to the authorities, who removed them.

I’d love to be able to post pictures of giant hogweed, but I’ve never seen it. I’ll consider that a good thing.

The principal difference between the two is size, although that doesn’t help early in the season, when plants are still small. Giant hogweed grows to five and a half meters (18 feet!) tall, with a stem diameter of 15 centimeters (six inches). Cow parsnip grows to three meters (ten feet), with a stem diameter of five centimeters (two inches). The leaves and umbels are correspondingly sized (much larger on giant hogweed). The largest cow parsnip plants pictured above were about seven feet tall.

A more useful way of telling them apart is to look at the lowest leaves. Both species have compound leaves. Cow parsnip leaves generally have three rather broad lobes, while giant hogweed’s are much narrower and often irregular. 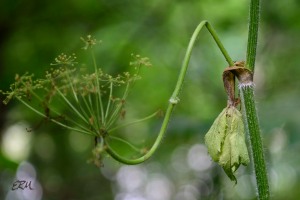 Also, the stems are different. Here’s cow parsnip; notice that but for the hairs, it’s solidly green. Giant hogweed stems have purple splotches. Both species have that ring of hairs at the nodes.

I wrote about the poisonous aspects of these plants in this post.

Remember, plants in the parsley family look a lot alike to the untrained eye. I’ve seen people mistake poison hemlock for Queen Anne’s lace, for example. Some umbellifers are tasty; others are deadly poisonous. Don’t mess around with them.

ps – about one hour after scheduling this piece to post, I saw this:

Dear Friends –
Maryland Native Plant Society board members
Jil Swearingen and (possibly) Rod Simmons will be on the Kojo Nnamdi Show on WAMU between 12:30 and 1:00 on Tuesday June 26. The topic is invasive plants. It was inspired by recent reports of giant hogweed in Virginia.

Be sure to tune in!

(Jil is one of the founding directors of MNPS and Rod is a Past President.)

More small blue things from May. Between travel and rain I haven’t had the opportunity to go hunting in Maryland for several weeks now. 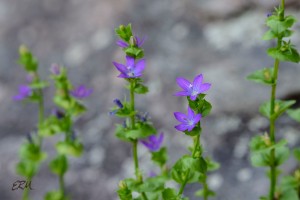 This annual is truly one of my favorites, and I make a point of hunting for it every year. Venus’ looking glass (Triodanis perfoliata) likes poor soils; look for it in open rocky or sandy places.

I have been having so much fun shooting with The Beast (70-200mm lens). Just look at the sparkle on those petals! 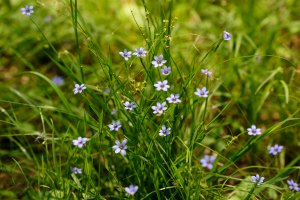 This is a species of Sisyrinchium, probably S. angustifolium though I can’t be sure. Blue-eyed grass is the common name, and indeed the leaves are grass-like. It’s in the iris family.

And speaking of irises, the ones I obsessed over last year are going strong. The ones along the canal are, anyway. The ones in the vernal pool are growing like crazy but I haven’t seen flowers on them yet.

I wish I had some new pictures of Baptisia australis to share, but honestly I haven’t even been out to shoot them. We’ve had tremendous amounts of (badly needed) rain in recent weeks, and I know that part of the river well enough to know that one stand is under water. Here’s what they looked like budding up in early May this year. 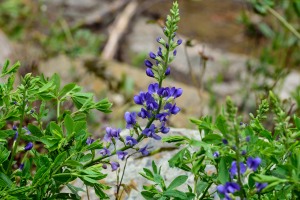 The other stand I’m sure is fine, but the channel I need to cross to get at them is flooded, too. Here’s a picture from last year.

Random pictures of small blue things (and purple things), because once again I haven’t the time to write meaningful content.

I don’t know if this is a color variation of common blue violet (Viola sororia) or something else. There is a well-known white form, sometimes called Confederate violet, but it doesn’t look quite like this one. Violets are notoriously promiscuous so who knows. The color is remarkably consistent every year. I’ve only seen them at Rachel Carson Conservation Park.

If you see a blue violet that stands well above the level of its leaves, and if it’s growing in or very near to open water, then it’s probably marsh blue violet (Viola cucullata).

Wild geranium (Geranium maculatum), also at RCCP. These two were somewhat bluer than is typical.

Virginia spiderwort (Tradescantia virginiana) There aren’t many three-petaled flowers around.

Only one of the seven species of Oxalis found in Maryland is an alien, but some of the others can be awfully weedy. I like them anyway. I’ve been on the hunt for Oxalis colorea, previously overlooked here until a fellow botanerd found it [hi, Bill]. If I make any progress I’ll write about it. In the meantime, though, you just can’t call violet woodsorrel (Oxalis violacea) a weed.

Even the leaves are charming.