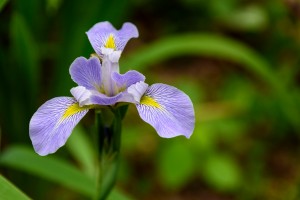 I think I made a pretty convincing argument in yesterday’s post, by following this bit of advice from Michigan Flora:

All of these characters are variable, and several must often be considered before identification can be made. 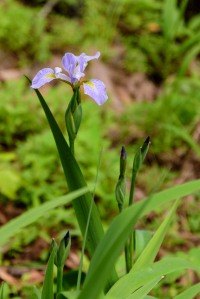 But the best advice is given by the American Iris Society:

It is in the seeds of the two species that an almost infallible means of separation is found.

A-ha. I need to collect seeds, once they’re ready.

Of course, that would be illegal. I might be making some inquiries soon. Maybe I can get permission. You know, for science. 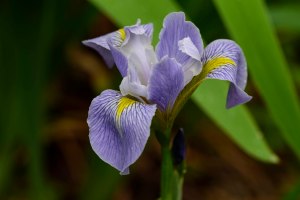 Enough of this. Enjoy the pictures. 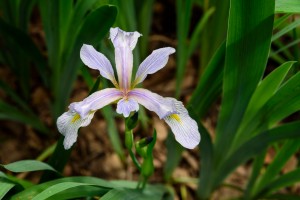 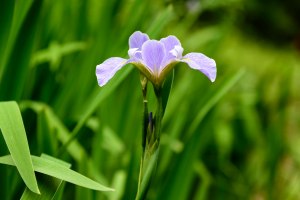 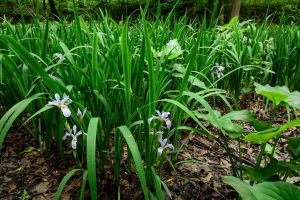 When it comes to Iris versicolor and Iris virginica, there are numerous differences. After hours spent reading the literature, I was able to tease them out. They’re detailed in the chart below.

I. versicolor is mostly a northern species, while I. virginica is mostly southern (with a few disjunct populations along the Great Lakes). Maryland is one of the places where their ranges overlap. If I’d seen them in Massachusetts or North Carolina, I could identify them by location alone. But I found them in Maryland, in Montgomery County, where both species have been reported, which brings up another problem, but that will have to wait.

Many of the differences as described are relative rather than absolute. Also, some authorities differ, as you’ll see. Sources (and a few definitions) are at the bottom.

I sampled six plants at each of the two sites. Stand #1 is situated in a vernal pond, currently without standing water, with a tree canopy providing plenty of shade. Although there are a lot of irises in the stand, only six were blooming; these were all in the relatively sunnier part of the stand. The irises form a near monoculture, surrounded by a near monoculture of lizard’s tail (Saururus cernuus).

Stand #2 is situated along the C&O Canal, next to but not currently in the water. The site is almost fully sunny, with some dappled shade provided part of the day by a single large tree. The area is swarming with other plants, both native and alien. Most of them are kept small and short by occasional mowing of the bank above the irises.

In Stand #1, five of the six specimens had cauline leaves taller than the flowering stem; the sixth one was much shorter. Five of the specimens had notched petals, while one had flowers mostly spent, the petals all damaged. None of the spathes appeared to be thin, dry, membranous, or papery. I was only able to see a few style columns far enough inside to look for the auricles. I believe they were present, but wouldn’t swear to it. (I refuse to pick or dissect a flower found on federal park lands.)

In Stand #2, two plants had cauline leaves longer than the flowering stem, one had leaves equal to the stem, and three were shorter. One plant had all three petals notched while two plants had no petals notched. The other three plants each had one notched petal, with the other two missing or damaged. The spathes looked much the same as in Stand #1. I was unable to see far enough into the style arms to determine if there were auricles.

In both stands, all the signals had a bit of a fuzzy appearance when seen under a 10x magnifying lens. At that magnification I couldn’t say if they were pubescent or papillate, so I took a lot of shots with the macro lens, then zoomed and cropped the best shot to get this: 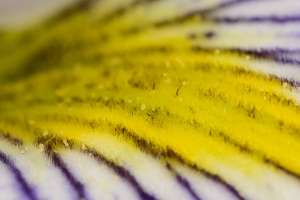 The tiny round things are actually grains of pollen, but was I looking at papillae or hairs? I sent the photo to a botanist friend, who said that they are hairs. (This was later confirmed by another expert.)

The final couplets for these species in Weakley’s Flora read:

Based on my observations, I have to conclude that Stand #1 is Iris virginica. Stand #2 is trickier because there was variation, but since the signals were pubescent, I have to say that those plants are also I. virginica.

Also, I should be so lucky as to find significant stands of two similar but different species within a hundred yards or so of each other.

But… which variety are they?

In Stand #1, four of the plants had two branches, one had one, and one had three. Three of the plants also had axillary inflorescences (secondary flowering stems arising from a leaf axil). The plants were of fairly uniform height, around 80 to 90 centimeters. So these are probably I. virginica var. shrevei.

Stand #2 was again a little trickier. The plants I measured were 70 to 80 centimeters tall, but I can’t tell the height for the whole stand, as they were growing up a bank and I really didn’t want to stick my hands down in there among the poison ivy to measure them. Five of the plants had two branches, and one had one branch. Only one had an axillary inflorescence.

Again, should I be so lucky as to find two different varieties so close together? I doubt it. I’m going to make an educated guess that Stand #2 is more stressed by the presence of many different species of plants and a less uniform soil (along the edge of a canal, randomly rocky, versus uniformly wet, level soil with essentially zero competition from other forbs), and that these factors account for the variations. These plants are very likely the same species as Stand #1. 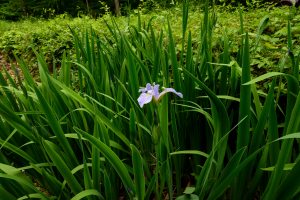 Told you I was obsessed.

Irises are beautifully complicated flowers. In order to identify the species I’d found, I needed to understand how irises are described, and how they’re structured. 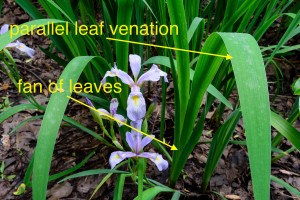 Irises are monocots. Monocots usually have different growth forms and habits from dicots. This group of leaves arising fan-like from a single point is a typical (though not universal) characteristic of monocot plants. Looking closely you’ll see parallel veins, also typical of monocots, although there are dicots with parallel venation. 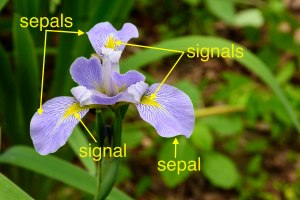 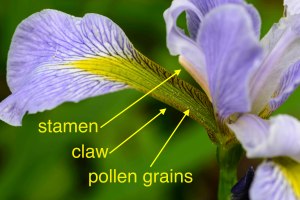 The abruptly narrowed part toward the inside is sometimes called the claw. The stamen is above it, hidden by the style arm. 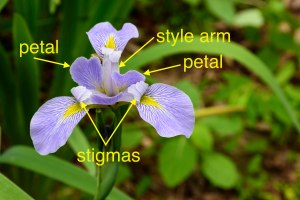 A flower’s gynoecium (“female” part) is called the pistil; it consists of a stigma, which receives pollen, and a style, which connects the stigma to the ovary. In irises, the style is often called the style arm or style column. It’s the petal-like structure lying atop the sepals, covering the claws. The two curled lips on the ends of the style arms are the stigmas. The petals are more or less vertical. 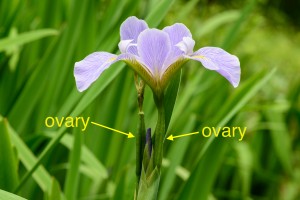 The ovary is below the rest of the flower (this is termed inferior), and looks like a swollen part of the peduncle. 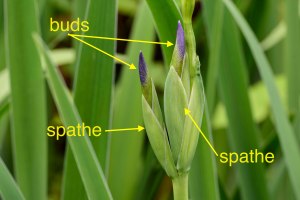 Surrounding the emerging buds is the leaf-like spathe.

Horticulturalists refer to the sepals as falls and the petals as standards, but I’ve never seen these terms used in botanical sources.

tomorrow: the differences between I. versicolor and I. virginica 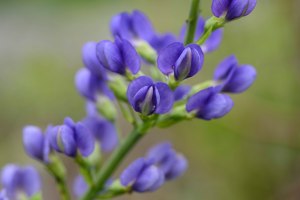 I hope to post more pictures in a few days, when the iris series is done, but if I wait ’til then these plants will be done blooming, so go looking for them now. Baptisia australis (Fabaceae) is not often see in Maryland. It likes the bedrock terraces in the Potomac Gorge. Be careful of high, fast-moving water and poison ivy. There isn’t much else blooming now, so the color really stands out. 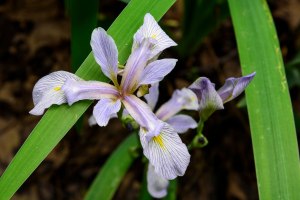 Three years ago, when I started this blog, I was making simple posts that combined my interest in plants with my newfound hobby of photography. My focus changed as these two interests grew and reinforced one another: the more I learned about the plants, the more I wanted better pictures of them. And as I got better pictures, I wanted to learn even more about the plants.

So this blog is mostly an exercise in teaching myself photography and botany. Which leads me to irises, because while attempting to identify the beautiful flowers pictured here, I crossed a line: I’m not just interested in native wildflowers, I’m obsessed with them.

This iris is a perfect example. Last Sunday I went out to visit two stands of these plants, with the single goal of getting better pictures than I’d gotten in past years. But then I decided to reconsider my earlier identification of them as Iris versicolor (harlequin blue flag, or northern blue flag). Could they be Iris virginica (Virginia iris or southern blue flag)?

The pictures didn’t provide enough information, or the right information, so Monday morning, as soon as the rain passed, I donned rain jacket, rain pants, and gaiters, got a notebook, pen, hand lens, and measuring tape, and went back to the site. The rain gear was really for protection against poison ivy (it didn’t entirely work), as I’d have to scramble along a bank covered in it to get at one of the stands.

Then I went home and compared my notes to every description of the two species I could fine on-line. I came to a tentative conclusion, but wasn’t convinced. One of the problems was that even under 10x magnification with a hand lens, I wasn’t quite sure what I was seeing. So Tuesday morning, with rain in the forecast, I went out again, with full kit including camera, tripod, and macro lens, and spent more time taking pictures and more time making notes. And then spent more time on-line trying to figure it all out. 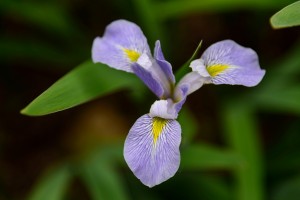 To understand technical descriptions you need to know the language, and to identify species you need to understand flower structure. And irises have a language and structure all their own, so that’s going to be the subject of tomorrow’s post.