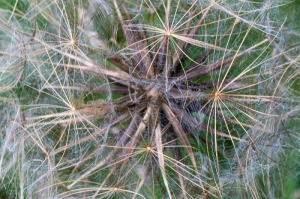 Each floret of a composite family plant produces a single fruit (which contains a single seed) called a cypsela. In many texts and on-line sources, the term achene is used. The difference between the two is technical (it depends on the position of the ovary), and for years both were used rather loosely. While trying to make sense of this I tripped over an article in the Brazilian Journal of Botany, the poorly translated abstract for which reads

The worry about the indiscriminate use of the terms cypsela and achene for the fruits of Asteraceae has been frequently detached by specialists in this family. The present work was developed aiming to verify the existence of arguments to justify the adoption of a term against the other. After historical and anatomical analysis, we concluded that there is technical basis to consider cypsela and achene as different types of fruits. For Asteraceae, the correct is to call cypsela; achenes are only derived from superior ovaries, as in Plumbaginaceae.

At any rate, picture a single small seed with a tuft of hairs, like dandelions have. 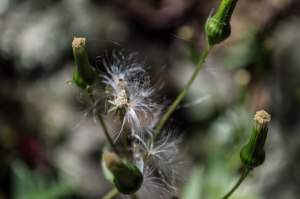 That’s pretty much it, unless there are barbs instead of hairs:

Bidens bipinnata (Spanish needles); note the capitulum (flower head) with yellow ray and disk florets at top, another flower head showing the phyllaries in the middle, and the barbed cypsela at the lower right

There are three types of aster family flower heads, named according to the type(s) of florets present.

If both types of florets (ray or ligulate and disk) are present in a head, the arrangement is termed radiate.

If a head contains rays only, it is called ligulate. 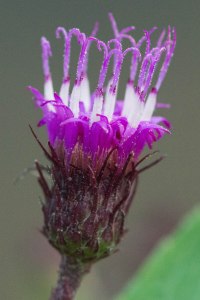 And if only disk florets are present, a head is called discoid.

Another characteristic of aster flower heads is the presence of phyllaries.

At the base of a flowerhead there’s a whorl of bracts (modified leaves), called an involucre. In aster family plants only, the individual leaf-like structures are called phyllaries. The number of phyllaries, how they’re arranged (how many rows), the shape, presence of hairs, and other fine details are characteristics used to distinguish certain species from others [see this recent post about tickseed].

Aster family flower anatomy gets complicated and the subject is full of jargon. Here’s a photo-illustrated primer.

Aster family plants have flowers by the dozens or hundreds, clustered together in heads. This plant —>
is Helenium flexuosum (sneezeweed), with one open head and one still-developing head. What appear to be yellow petals are actually individual ray flowers. If you click on the image and zoom in, you can clearly see several individual flowers at the bottom, each one three-lobed. The purplish, nearly spherical center part is composed of disk flowers. The ones on the bottom half are open, with two-parted stigmas protruding, while the upper half holds still-closed buds.

“Ray flower” is a general term. There are actually two different types of rays: ray florets and ligulate florets. Both are tubular-shaped at the bottom, and flatten out towards the top. Ray florets can be sterile or pistillate (that is, female*), and have 2 or 3 teeth or lobes at the end, Ligulate florets are perfect (that is, bisexual: containing both male and female parts*), and often have 5 teeth or lobes. 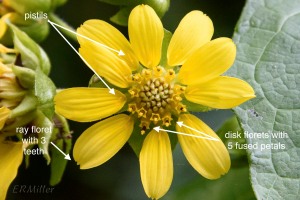 Smallanthus uvedalia (large-flowered leafcup), showing 10 ray florets and 13 open disk florets
[click on the picture to zoom in and see the details]

The central flowers in a head are called disk florets. These consist of five petals fused together, so that they look like a single five-lobed tube; the stigma often protrudes, sometimes dramatically. The central disk can be more or less flat to almost spherical (as in the first photo).

next time: the three types of aster flower heads

*with apologies to my friend Linda for anthropomorphizing

From golden ragwort in April to goldentop in October, about one in five flowering plant species that I find in the Maryland Piedmont is in the aster family.

Of the flowering plant families, the Asteraceae is probably the largest with about 23,600 species in 1,620 genera. [Encyclopedia of Life]  Whether or not it actually is the largest depends on the current state of taxonomic science; the other contender is the Orchidaceae.

There are 2,401 native Asteraceae species in North America. [BONAP] The Maryland Biodiversity Project lists 373 Asteraceae species (native and alien) in Maryland, and by my very rough estimate, about half of these can be found in the Piedmont.

So what are the characteristics of aster family flowers?  Have a look at this Jerusalem artichoke: 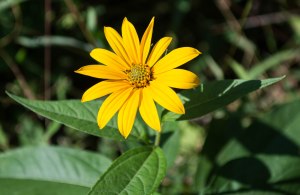 How many flowers do you see? If I zoom in I can see about 21, not counting the unopened buds.

Wondering how that can be? Here’s a clue: an older but still accepted name for this family is Compositae, or composites. Plants in this family bear heads that appear to be single flowers, but these heads comprise from several dozen to several hundred individual flowers.

This post is dedicated to my friends Cheryl and Barry, who independent of each other gave me the idea to write about plant families during the dormant season.

We haven’t had a hard freeze here in the Piedmont yet this season, but what with the drought and cooler weather and shorter days, the wildflowers are just about done for the season. Normally this is when I put my blog to bed for the winter, but this season I’m going to try to keep it going by writing about related subjects. And it occurred to me that I mention the Piedmont a lot, but have never really explained what the Piedmont is. So here’s a little primer.

Maryland is a complicated state, geologically speaking. From west to east, it measures about 250 miles, and includes five physiographic provinces. (A “physiographic province” is an area of similar landforms.) The combination of underlying rock formations, elevation, and climate gives each province its own character.

The westernmost of these is the Appalachian Plateau, in Garret County and the western quarter of Allegany County. It consists of folded strata of sedimentary rocks. Maryland’s highest point is here: 3,360 feet at Backbone Mountain.

To the east of that is the Ridge and Valley province, in Allegany and Washington Counties. It also consists of folded sedimentary rock. Here, though, differing resistance to erosion has allowed the formation of long ridges and valleys, including the very wide Great Valley section, which ends on the east with the next province, the narrow Blue Ridge in the easternmost part of Washington County and the western third of Frederick County. The Blue Ridge is one big anticline (with sub-folds) of metamorphic rock. The mountain tops are largely quartzite, highly resistant to erosion.

Continuing east, the next province is the Piedmont, an area of hills and valleys underlain by complex folds and domes of metamorphic and some igneous rock. The Piedmont is in Frederick, Montgomery, Carroll, Howard, Baltimore, Harford, and Cecil Counties.

The Piedmont is bounded to the east by the Fall Line, where the metamorphic rock gives way to the unconsolidated sediments of the Coastal Plain. That’s right, the Coastal Plain isn’t really rock, it’s just sand and gravel that’s been carried downstream and deposited. In Ocean City the sediment layer is 8,000 feet thick!

Fall lines define geological boundaries between uplands and lowlands, and are characterized by waterfalls. Sometimes the areas will be referred to as fall zones, when the transition is not as dramatic and more likely to be characterized by rapids than waterfalls. Think of Great Falls, which is not a single plunge over a cliff, but rather a series of falls (none more than 20 feet tall) totaling a 76 foot drop in elevation over two thirds of a mile.

Historically, seagoing vessels could travel no farther west than the fall zone, and that’s why cities were established there: Philadelphia, Wilmington, Baltimore, Washington DC, Richmond, Raleigh, and so on. Interstate 95 runs mostly just to the east of the fall zone.

Botanically, the Piedmont (“foot of the mountain”) is a really neat place. Plants don’t always recognize physiographic province boundaries. Some species are very particular in their growing conditions and will only be found in specific places, while others are generalists and can be found everywhere. In the eastern Piedmont you’ll sometimes find plants that are mostly limited to the Coastal Plain, and in the western Piedmont you’ll sometimes find plants from the Blue Ridge. There’s a lot of floral diversity in the Piedmont.