The other day while walking to my mailbox I saw a lot of this on the ground:

It’s Cardamine hirsuta (hairy bittercress), a particularly annoying lawn and garden weed. (Weed = a plant growing where it isn’t wanted.) C. hirsuta is a winter annual: the seeds germinate in autumn, and by winter produce these basal rosettes of leaves. In a few months the plants will send up slender flowering stalks, with tiny white flowers that are kind of pretty, if you’re a botanerd, anyway. But then those flowers will set seed, and at the slightest disturbance (like trying to pull them from the garden), the seeds will pop out explosively, in a surprisingly large radius.

I have to admit up front that the mustard family is not my favorite. There are many weedy-looking brassica species in the Maryland piedmont, but at the same time some lovely early spring wildflowers.

Brassicas are mostly herbaceous annuals or perennials, often with a basal rosette of leaves. Stem leaves are usually alternate and are often pinnately compound (as are the basal leaves), though sometimes palmately compound. The older family name, Cruciferae, is a reference to the flower shape: cruciform, like a cross, with four petals. There are usually four sepals (sometimes three) as well, but they fall off early, so you might not see them when looking at the flowers, which are borne on racemes or corymbs. (A corymb is a type of inflorescence where each pedicel is arranged along the stem alternately, with the lowest flowers having the longest pedicels and the highest flowers having the shortest, with the result that the flowers are borne more or less in one plane. At first glance, corymbs look rather like umbels, but in umbels all the pedicels originate from the same point on the stem.)

The fruits of brassicas are called siliques. Siliques are long and narrow, dry, and split open lengthwise at maturity, revealing a lengthwise septum (partitioning tissue).

Almost all brassicas contain pungent compounds called glucosinolates, which give the plants a characteristic pepperiness (like the flavor of watercress). Possibly this is an evolutionary response to herbivory. I have read that all brassica species are edible, but for many people that may depend on the definition of edible. None are outright poisonous, anyway. Many of the brassicas also contain isothiocyantes, aka mustard oils.

Worldwide there are a little over four thousand brassica species, in 370-some genera. North America has about 650 native species, making the Brassicaceae the sixth-largest flowering plant family on this continent. And in Maryland there are over 80 species, about half of which can be found in the piedmont, and more than 50 of which are alien. Four of the natives are on the watchlist (S3) and four more are ranked S1/highly state rare.

next time: early spring brassicas in the piedmont 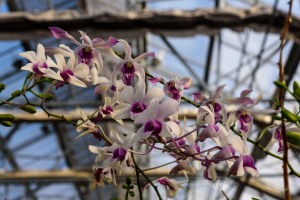 As DC area plant lovers know, every year Smithsonian Gardens and the US Botanic Garden team up to present an exhibition of orchids, held at different locations around the national Mall. The 2017 show, Orchids: A Moment, will be at the Hirshhorn Museum. It opens Saturday, January 14 and runs through May 14. Go see it. Then go see it again, because the displays will change frequently. Both agencies have magnificent orchid collections. I can’t wait to see how the specimens will be presented.

Please note, starting February 23 the Hirshhorn will also be holding a major exhibition of work by Japanese artist Yayoi Kusama. Entry to this exhibit will be by timed passes, and large crowds are expected. I’m told that this won’t get in the way of people viewing the orchids, but it could lead to lines and confusion.

Also, Smithsonian Associates will be offering several guided tours in the morning hours, before the Hirshhorn opens. More information at their website.

Aplectrum hyemale
Puttyroot or Adam-and-Eve is a hibernal perennial: a single leaf grows from a corm (an underground plant stem) in autumn, taking advantage of winter sunlight coming through the deciduous trees under which it grows, and then withers in spring. If conditions are right, it will then send up a flowering stem. In the Maryland piedmont that will be sometime in mid to late May. It’s native to eastern North America, and is on six northeastern states’ conservation lists (as endangered, threatened, etc.). 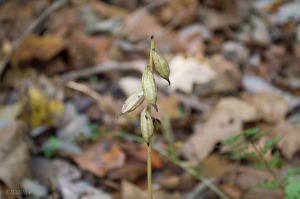 Galearis spectabilis
Showy orchis has a similar range to puttyroot, and grows in similar habitats (rich, moist soils in deciduous woodlands). It’s not a hibernal, though: the two basal leaves of a mature plant appear in spring and persist until mid autumn (young plants have only one leaf). A single flowering raceme produces up to a dozen flowers; look for them in starting in mid April in the piedmont. The flowers are purple and white, but there is a form with all-white blossoms, as shown here. Showy orchis is on five states’ conservation lists. 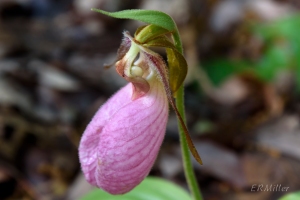 Cypripedium acaule
Pink lady’s slipper or moccasin flower grows in a wider range of habitats than the previous two orchids, including mixed deciduous-coniferous woodlands, and has a more northern and eastern range that includes the Appalachians, New England, the upper midwest, and parts of Canada. It’s listed in four states. Like showy orchis, the plant consists of two basal leaves and a single flowering stem, but this stem produces only one flower. It’s a spectacular one, though. Look for it in early to mid May in the piedmont. Goodyera pubescens
Downy rattlesnake plantain is yet another native of eastern North American woodlands. This orchid likes drier, more acidic soils than the others. The plant has a basal rosette of white-striped evergreen leaves, and produces a single flowering spike in mid to late July. The spike can be more than a foot tall, with dozens of flowers crowded along the topmost portion.

Tipularia discolor
Like puttyroot, cranefly orchid has a single hibernal leaf that withers before the single flowering raceme emerges. This usually happens in mid to late July, and the flowers open roughly two weeks later. There can be four dozen or more tiny flowers on the spike. This is also an eastern North America native, but it’s found more to the south and west than the others. It’s listed in five states. Cranefly orchid grows in moist soils in deciduous and mixed deciduous-coniferous woodlands. At first glance the flowers seem to be bilaterally symmetrical, but they are actually a little torqued. 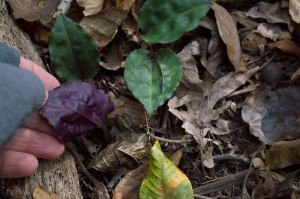 Few plants inspire passion like orchids do: we’ve been cultivating them for 3,000 years, despite the fact that they offer us little by way of food, clothing, medicine, or anything else people grow plants for.  In Europe orchid cultivation began about the time the Dutch tulip craze was waning, and now there are over 100,000 known cultivars and hybrids.

The number of species is impressive, too, estimated to be around 28,000 (some experts believe there may be as many as 35,000), in over 700 genera. This makes the Orchidaceae either the largest or second largest plant family (the other being Asteraceae), in terms of number of species. In both families the number of species is constantly changing, in accordance with both new discoveries and phylogenetic research.

In North America, there are 310 species of native orchids, making the Orchidaceae the 13th largest family on this continent*.

In Maryland, though, the news is sad. Although there are records for about 44 species (29 in the piedmont), of these…

Orchids grow in almost every habitat, except in true deserts, open water, and glaciers***. Most of the species grow in tropical rainforests, but the family is cosmopolitan: orchids are found on every continent (and Oceania) except Antarctica.

They can be terrestrial or epiphytic. An epiphyte is a plant that grows on another plant for support, without causing the other plant harm (therefore not the same as a parasite). The epiphytic orchids have aerial roots that absorb water and nutrients from the air. They are mostly found in the tropics, while the terrestrial orchids are mostly found at higher lattitudes.

Terrestrial orchids grow with certain soil fungi in mutually beneficial associations termed mycorrhizae (singluar mycorrhiza). Because of this, our native terrestrial orchids are extremely hard to grow in the garden; if the correct fungi are not present in the soil, the orchid plants will likely die in a year or two, and seeds will not germinate. 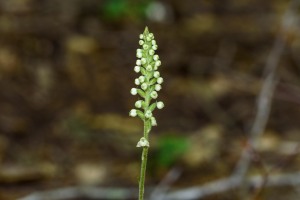 Orchids usually bear flowers on a spike, raceme, or panicle, or sometimes singly. A spike is a stem with single flowers along it (right); a raceme is a spike whose flowers have pedicels (below); and a panicle is a branched raceme.

Although there is a huge variety of form, orchid flowers are easily recognized. They always have three sepals, which can be single or partly fused, and are either green or petal-colored; and three petals. Of the petals, the two lateral ones are usually identical, while the center one is formed into a lip or pouch. The flowers are usually bilaterally symmetrical. 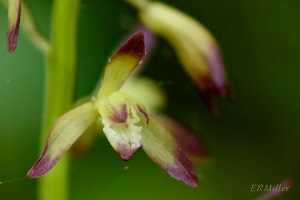 As for economic value, it’s entirely about the passion for ornamental flowers, with one exception: Vanilla planifolia, the only orchid species to produce an edible fruit. There are a few orchid species that produce edible tubers, but these have never been grown commercially.

next time: orchids in the Maryland piedmont

Just remember, in ten weeks (more or less, depending on weather), there will be harbingers-of-spring (Erigenia bulbosa) poking up through the leaf litter to welcome the vernal equinox.

I know, skunk cabbage blooms earlier. But wouldn’t you rather look at these?