After checking on the irises last Friday, I went to hike Billy Goat A. I had one goal: get photos of eastern prickly pear cactus flowers. It wasn’t too long before I came across this underwhelming specimen. I had a look ’round and found more plants, but no more flowers. Figuring they needed another week, I hoisted the pack and continued along the trail.

And then suddenly I spotted this huge stand, blooming in the shade of a scrub pine (Pinus virginiana). 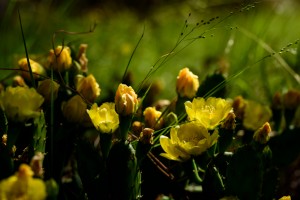 Many times I photograph a plant in order to show specific details, or give an accurate view of the plant for reference, so I try to get even exposure across the subject. 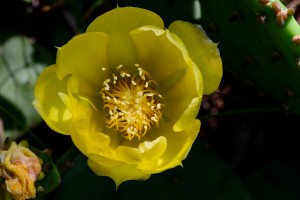 On this day, the flowers were glowing in the mid-morning sun, and the shadows cast by the plants heightened the effect.

All I wanted to capture was that beautiful yellow in the layers of translucent petals.

It was a busy day, so once finished I packed up the camera and headed back to the car. And then I spotted something completely new. Couldn’t get good photos (pressured for time, wind blowing, etc.), but I got enough to ID the plants later. Ends up they’re threatened and listed S1/highly state rare in Maryland. So guess what I’m doing this morning? More on that plant soon. 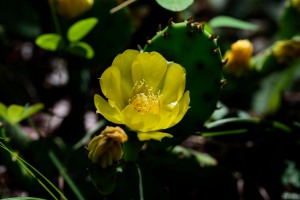 I had a few goals for my second hike on the Billy Goat A trail:

So it came as a surprise and delight to find this before finding any of the above.

This is Opuntia humifusa, aka eastern prickly pear, the only cactus to grow wild in the state of Maryland, where it’s mostly a plant of the coastal plain. But that’s one of the neat things about the Potomac Gorge: you find things there that aren’t usually found in the Piedmont. Also, strangely, there are records for this plant in Washington County, in the ridge and valley physiographic province.

This species is fairly well distributed through the mid-Atlantic, the South, and the Midwest. It’s listed as endangered in Massachusetts, exploitably vulnerable in New York, special concern in Connecticut, and rare in Pennsylvania.

Being a cactus, it of course is going to like growing on thin, sandy, rocky, well-drained soils, and prefers full sun as well. The Illinois Wildflowers site says that one of the species’ biggest threats is invasion by woody vegetation (presumably because of shading). I found this stand in a somewhat open area growing amid scrub pine (Pinus virginiana) and shrubby St. Johnswort (Hypericum prolificum), in a surprising amount of shade. This is a good size specimen (a few feet across). I hope it can hang on a few more years.

Eastern prickly pear is also known as devil’s tongue, low prickly pear, and smooth prickly pear. Don’t let that last name fool you: it may look more or less smooth, but it has hair-fine spines that can cause a lot of pain.

As in Death Valley, I was there at the wrong time to see it bloom. You can see the shriveled flowers in the first picture. I did have a look ’round for other plants, but as there are signs all over Billy Goat A asking people to stay on the trails, I didn’t go far. (Bear Island is under tremendous stress from overuse.)

Oh well. It’s something to look forward to next summer. 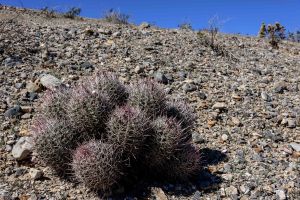 While exploring the area around the globemallow I came across two different types of cactus plants.  One was well in bud, so I made it a point to go back two days later, right before leaving for the flight home. No luck. Still in bud.

Beavertail looks a lot like the familiar prickly pear cactus (it’s in the same genus), but it lacks spines. There are four varieties; I have no idea which one this is. Here’s a picture of it in flower. [sob]

Cotton-top cactus is distinctive because of its form (polycephalus means “many heads”). You can see from this photo how it got its common name:

By the way, if you’re scrambling up a scree where cotton-top are growing, choose to pass the plants on the downslope. I figured this out just a few steps shy of one of the beasts, where sure enough I lost my footing and went for a bit of a slide. It could have been comic in a Road-Runner sort of way. More likely it would have been really painful.