The earliest ephemerals are out and blooming a few hundred miles away, in South Carolina, but it’ll be a few more weeks before they start blooming here in the mid-Atlantic. Here’s a sneak preview of what’s to come, presented more or less in the order in which they bloom. All of these should be blooming by the end of March at the latest. 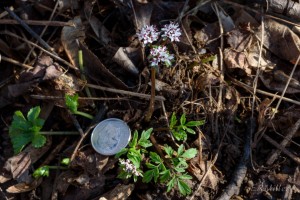 One of the first up, sometimes as early as late February. Look for it in moist woods but you have to be eagle-eyed to spot it (note the dime sitting there for scale). Just as I was finishing this post, a friend reported seeing harbinger blooming here in the Maryland Piedmont today!

A hibernal plant; the leaves usually wither away by the time the flowers bloom, or soon after. If you see the leaves now, note the location and check back in a few weeks for the flowers.

Don’t forget to look up once in awhile! This very common understory shrub is one of the first plants to bloom in our area.

This plant has a long bloom period, often starting early in the season. Look for it growing right on large rocks, as the common name suggests. The sight of a mass of these delicate blossoms dancing in even the slightest breeze fills me with joy.

Such a dainty thing.

Corydalis flavula (short-spurred corydalis and many other common names; Papaveraceae)

Another petite flower, easy to miss. You have to get very close to see all the ornate details. 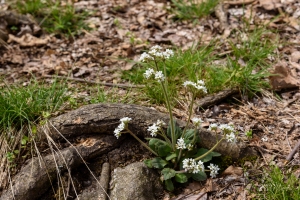 This fine specimen is one of the largest I’ve seen. I usually find them in rocky places. 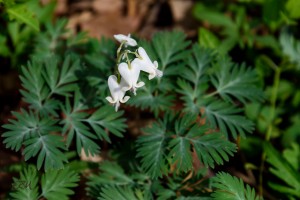 The delicate, lacy, ferny foliage is almost identical to that of Dutchman’s breeches; you have to see the plants flowering to tell them apart with confidence.

From my limited observation, this species is usually waning when squirrel corn is just getting started. There’s a hillside on the Cabin John Trail that’s covered in these plants.

The flowers pictured here are easily identifiable as a Cardamine species. In the Maryland Piedmont, we have about 10 species of Cardamine, a handful of which have flowers very similar to what’s pictured. We call them “toothwort”, and the various species are readily identified by differences in their leaves.

Not so with this one. Almost as soon as I started trying to identify these I ended up in a taxonomic whirlpool.

A Guide to the Flowering Plants and Ferns of Iceland shows one species with flowers like this, and calls it Cardamine pratensis ssp. angustifolia. The listing Cardamine nymanii in the index goes to the same plant. Are the names synonyms? The book doesn’t say.

The Integrated Taxonomic Information Service accepts both C. pratensis and C. nymanii, but does not accept C. pratensis ssp. angustifolia, which it considers a synonym for C. nymanii.

The Botanical Map of Iceland shows a similar-looking plant and labels it C. nymanni.

The Natural History of Iceland website shows only C. nymanii.

In English one of these is called cuckoo flower, and the other is lady’s smock. Both have the same common name in Icelandic: hrafnaklukka.

I had to go to Svalbard to get an answer. Not literally, of course (I wish!), and only an answer, not the answer. The comments section of the listing for C. pratensis ssp. angustifolia on the svalbardflora.no website says “The Cardamine pratensis group is unusually complicated taxonomically.” It goes into a rather interesting discussion (interesting if you’re into that sort of thing) about the taxonomic difficulties and distribution of the similar species.

But hey, useful ID tips from the same site:

Well, guess what? I don’t have good enough pictures of the leaves. The ones I do have definitely show glabrous (smooth), entire (not toothed or lobed), fleshy leaflets, but they don’t have distinct petiolules (leaflet stems).

Gah! So what species did I find? I really can’t say.

Maybe I should just dub them “Icelandic toothwort” and add to the confusion.

Whatever species they end up being, they’re fairly common throughout Iceland, found almost everywhere except in parts of the highlands. I saw them blooming on Mt. Esja and in several places around Ísafjörður in the Westfjords.

Everything that was blooming last week is still blooming, except that spicebush is nearly done, and leatherwood is done. 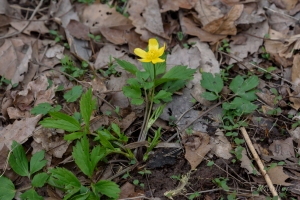 And, in non-flowering plant news, new croziers are popping out on Christmas fern (above) and rock polypody (below, growing out of moss next to lichens).

© Elizabeth R. Miller and elizabethswildflowerblog.com, 2014-2018. Unauthorized use and/or duplication of this material without express and written permission from this site’s author and/or owner is strictly prohibited. Excerpts and links may be used, provided that full and clear credit is given to Elizabeth R. Miller and elizabethswildflowerblog.com with appropriate and specific direction to the original content.