This first species, found near Akureyri in Iceland, has the common names broad-leaf fireweed, broad-leaved willowherb, arctic fireweed, dwarf fireweed, arctic river beauty, glacier rose, and who knows how many more. The Icelandic name is eyrarrós. The currently accepted botanical name (per ITIS) is Chamerion latifolium, but it’s also known as Chamaenerion latifolium and Epilobium latifolum.

Whatever you call it, it’s striking, standing about a foot tall, the blue-green leaves contrasting the rosy purple blossoms. It’s fairly common in Iceland, though with scattered distribution. It can also be found in higher latitudes around the northern hemisphere, and in mid-latitudes at high elevation (India, Pakistan, Nepal). In North America it’s present in Greenland, much of Canada, Alaska, and in mountainous parts of the West. A closely related species, Chamerion angustifolium, is found in parts of Maryland (as well as Iceland). And Nova Scotia, where I saw it two years ago. 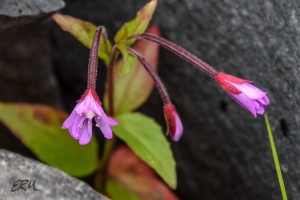 There are about nine species of plants in the Onagraceae in Iceland, but I saw only two; this second species was near the glacier Sólheimajökull in the south of Iceland. It’s callled fjalladúnurt in Icelandic and alpine willowherb in English. It’s also called pimpernel willowherb, alpine willowweed, and dwarf fireweed. The accepted botanical name is Epilobium anagallidifolium.

This species has an interesting split distribution in North America: in the east it’s found in Greenland, Quebec and a few of the Maritime provinces, New England, North Carolina, and Tennessee, then westward from the Rocky Mountains. (Note that BONAP does not show it present in the two southeastern US states.) It’s also found in northern Europe and northern Asia.

E. anagallidifolium is readily identified by the bent flowering stems (a harsh-weather adaptation according to NatureGate) and the dark red calyx.

Would you believe that I keep a detailed “life list” of my finds? No kidding. It’s arranged by plant family. Noted under Onagraceae are the two species in Iceland, two more in Nova Scotia, four in the Potomac gorge, and three in Death Valley.

One more thing, I can’t resist. Speaking of complicated, here’s a comically complicated explanation of Oenothera (the type species for this family):