Monday morning I went out to shoot a very special plant (like I did with white trout lily the previous week), and was surprised to find a large number of short-spurred corydalis growing with it (more on the other plant next time).

Also known as yellow corydalis, yellow fumewort, yellow fumitory, and yellow harlequin, Corydalis flavula is a small annual forb, growing to about a foot tall and bearing flowers in racemes. The flowers are about a quarter to a half inch long.

C. flavula is in the Papaveraceae, closely related to the Dicentra species I wrote about a few days ago. Like other species in the fumitory sub-family, it has two very short sepals, two inner petals, and two outer petals. One of the outer petals is spurred and one isn’t. The leaves are typical of the fumitories as well, compound with lobed leaflets, giving a ferny look to the plant.

This might be an example of a disymmetric flower, with two perpendicular planes of symmetry. So help me I’m tempted to go find one and dissect it, because I’ve never been able to get a detailed enough photo. Disymmetric or no, it certainly is complicated.

I’m not sure how many species of Corydalis are found in Maryland. BONAP shows only C. flavula present, while Maryland Biodiversity Project lists one other but has no records for it, and USDA PLANTS shows two others. C. flavula ranges from northern Florida to New York, and west as far as the eastern Great Plains. It’s threatened in Connecticut and Michigan.

After all the research into the borage and waterleaf families I was looking forward to writing a short little something about this odd yet charming spring ephemeral. Then I went to verify a few facts and saw references to both the fumitory family (Fumariaceae) and the poppy family (Papaveraceae).

Short version: pretty much the same thing happened with these two families as with the other two. The interesting thing, to me, is that fumitory-type flowers look absolutely nothing like poppy-type flowers, while the borage and waterleaf flowers (eg Phacelia and Cryptantha species) look an awful lot alike. But then, classification is based on phylogeny, not morphology.

At any rate, flowers previously placed in the fumitory family do have similar features, namely two very small sepals and four petals in two pairs, the outer pair being somewhat squashed and spread-out looking. The symmetry is either bilateral (one plane of symmetry) or disymmetric, meaning there are two planes of symmetry, perpendicular to each other.

Other flowers in the Papaveraceae look like, well, poppies, with radial symmetry.

Back to squirrel corn. In Maryland it’s found in a few parts of the Piedmont and all the physiographic provinces to the west. It’s close relative Dutchman’s breeches is more widespread, in most of the state except parts of the Coastal Plain. A third species, D. eximina, is found in Prince George’s, Montgomery, Allegany, and Garret counties, and is listed S2/threatened. I haven’t seen it yet, but I really want to, because it, too, has funny common names: turkey corn and wild bleeding heart.

Other fumitory-type flowers found in Maryland include one species of Adlumia, three types of corydalis, and one (alien) species of Fumaria. The popular garden ornamental bleeding hearts (formerly Dicentra spectabilis, currently Lamprocapnos spectabilis) is native to Asia. 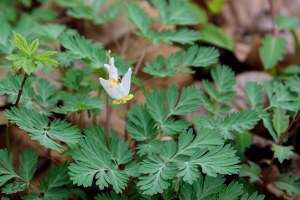 A large patch of the forest floor near the white trout lilies is carpeted in the finely dissected foliage of squirrel corn and Dutchman’s breeches. I’ve noticed that the latter species has a consistent medium green color, while the former is somewhat bluish (glaucous). But less than a mile away, near Plummer’s Island, there’s a stand of the two Dicentra species growing together where the foliage is indistinguishable. I’ve heard that other native plant enthusiasts have observed the same thing, and that some have observed the opposite. Not sure what to make of that, except that it isn’t a reliable way to distinguish the two species. You have to see the flowers. (Or the corms, but I don’t advocate digging up plants growing in public lands.)

Dutchman’s breeches seems to bloom about a week or so before squirrel corn, at least in the Potomac Gorge. It’s close to done now, but squirrel corn should still be blooming.

A note about common names

Timothy Coffey in his well-researched The History and Folklore of North American Wildflowers (Houghton Mifflin Company, 1994) gives common names for about 700 species of plants. Many of these names are probably historical and no longer used, but if you’re interested in such things it’s a fun resource. The following list is from the book.

I know one woman who calls D. cucullaria Dutchman’s-britches.