I love all the spring ephemerals; can’t say which are my favorites. But trout lilies are way up there.

Of the twenty some species of Erythronium, two are found in Maryland (maybe three depending on which authority you consult): E. americanum (yellow trout lily) and E. albidum (white trout lily). The latter is listed S2/threatened by the Maryland DNR. I figured I’d miss seeing both this year, but a little luck and persistence led me to a single white one blooming, and in the process I found a hillside covered in yellow ones (I stopped counting at 35). Here are a few pictures. 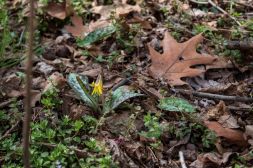 I know of two spots where white trout lilies grow. I spent more than an hour searching one of those areas after someone posted a picture of a white trout lily blooming. Couldn’t find it. Hiked to another area, shot the yellow trout lilies, then decided to go back for one more look. Pulled out my phone and searched for the picture, and sure enough, there were enough clues in it that I was able to narrow my search to a small area. Et voila! The one shown here in bud was from the other location, the day before.

Toadshade is a species of trillium, T. sessile (Melanthiaceae). The three maroon petals stay closed; the plants shown here are in full bloom.

There aren’t many wildflowers to see at this time of year, but in a few spots the woods are bright with short, white balls-on-sticks.

I have a confession to make that some of my friends will find surprising: foodie Elizabeth does not love the taste of ramps, aka wild leek (Allium tricoccum, Liliaceae).

However, wildflower enthusiast Elizabeth loves the flowers. Or at least the look of them, because they do smell like onion. 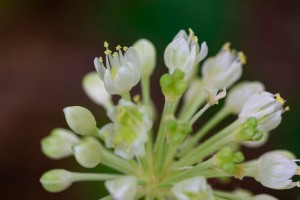 Each flower has six tepals, six stamens, and a single style. Multiple flowers are arranged on each umbel, which tops a single leafless stalk, making the plants look like balls on sticks. They stand about a foot tall.

almost all the green in this picture is from ramp leaves

In the springtime, of course, ramps are all leaves, but the leaves die back before the flowering stalk emerges. They do light up the understory.

Ramps range from Tennessee and North Carolina in the south to Manitoba, Ontario, and Quebec in the north, largely to the east of the Mississippi River, with some occurrences west of that (mostly in Minnesota). In Maryland they’re found in scattered locations in the piedmont and ridge and valley physiographic provinces. Look for them in moist, rich woodlands, where they get sun in early spring but deep shade in early summer. (And please don’t forage them, unless you find them on private land, have the landowner’s permission, and collect with sustainable practices – ie, don’t take the whole plant.)

Ramps are listed as special concern in Maine and Rhode Island, special concern commercially exploited in Tennessee, and noxious weed in Arkansas, which is interesting considering that neither USDA PLANTS Database or BONAP have records for ramps anywhere in that state.

So far this year I’ve noted about twenty alien wildflower species blooming in the Piedmont. Checking through old records, I see that nearly one in four wildflowers I’ve found has been alien. It’s a depressing statistic.

Like the natives, these alien wildflowers run the gamut from tiny and inconspicuous to large and showy. The latter are usually garden escapees, of course – naturalized species originally planted for their ornamental qualities.

Of these, the two star-of-Bethlehem species, Ornithogalum umbellatum and O. nutans, might be the showiest. They are classified in either the Liliaceae or Asparagaceae, depending on which authority you consult.

O. umbellatum, common star-of-Bethlehem or nap-at-noon, is a bulb-forming perennial native to Eurasia, with a typical monocot look: the white-striped, dark green leaves are basal, long, and narrow, so that before flowering the plant looks like a clump of grass. The bright white flowers have six tepals with green stripes on the bottoms, and six stamens; the inflorescence is a corymb. It really is a handsome plant. I used to see it fairly often along the Billy Goat trails, but haven’t in the past few years, so I only have this old iPhone photo of the flowers to show.

Common star-of-Bethlehem is found in all but three Maryland counties, and is widespread in North America, occurring in all areas except parts of the mountainous west, and in much of Canada as well. It’s considered a class C noxious weed in Alabama and potentially invasive, not banned in Connecticut.

The second species, O. nutans (nodding star-of-Bethlehem), I see more of every year, even though it’s not quite as widespread in Maryland or North America. The leaves are similar to those of O. umbellatum, but are somewhat succulent with more pronounced parallel veins. The flowers are white, but a bit dull-looking, with a silvery-gray cast, and they’re borne on racemes rather than corymbs. Standing at almost two feet high, O. nutans is rather larger than O. umbellatum, and more easily spotted at a distance. The species is considered invasive in the mid-Atlantic. 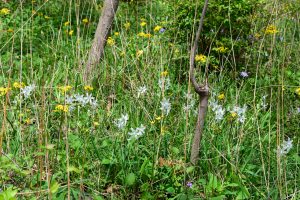 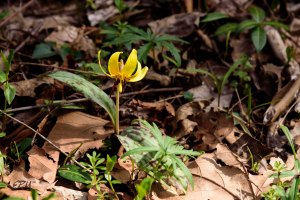 Recent chatter on various internet forums and mention of The Trout Lily Project got me interested in learning more about the Erythroniums. Twenty four species of them are native to North America; of these, E. albidum (see yesterday’s post) and E. americanum (pictured in this post) are by far the most widespread. All of the others are west coast or midwest species, with two exceptions: E. rostratum and E. umbilicatum. The latter is found in the southeast, as far north as Maryland.

Two characteristics distinguish E. americanum from E. umbilicatum. The latter has a dimple on top of the ovary, where the style attaches, while the former has a persistent style that attaches without a dimple. The other difference is the presence of auricles (“ears”) at the inside base of each tepal of E. americanum; E. umbilicatum does not have auricles.

Also, anther color varies from pure yellow to dark red in E. americanum. There is some thought that E. umbilicatum has more purplish anthers, but this characteristic is deemed unreliable. So to tell the difference, you have to look at the ovaries and look for auricles.

Which is why every time I see a dark-anthered trout lily, I’m down on knees and elbows, glasses off, gently poking back the petals and squinting at the insides.

I would love to be able to submit a record of dimpled trout lily to MBP. So far, no luck. All the trout lilies I’ve looked at have auricles and lack dimples.

Whenever possible I photo-illustrate my posts with my own pictures, but of course I have none of dimpled trout lily. For pictures and more information, go to the link at the start of this post. Also go to the MBP page for American trout lily and scroll down to Bill Harms’ photo of tepals and ovary, then have a look at Carolina Nature’s dimpled trout lily page.

UPDATE fellow blogger and citizen botanist botanybill sent this photo of E. americanum, Thanks for showing us the auricles, Bill! 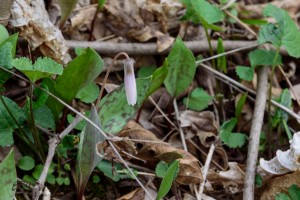 Hike for ten minutes to the one place where you know white trout lily grows. Realize that it’s a cloudy day and the flowers will likely be closed. Get annoyed with yourself when you see them closed and vow to come back on a sunny day.

Next sunny day, hike the ten minutes again. Spend awhile scouting the area to find the best candidate. Praise your luck that it’s growing on a slope up and not too far from the trail. Take a few pictures. Look at pictures on the camera monitor. Realize that the other plants that didn’t seem to be in the way are really in the way. Carefully move the invasive vine out of the picture and shoot again. Realize that the good angle you have for shooting includes some basal leaves of golden ragwort that won’t stay in focus. Look around for a stick to place atop the leaves to get them out of the way without damaging them. Take a few more shots. Realize that the sun has gone behind a cloud and the lovely golden glow is gone. 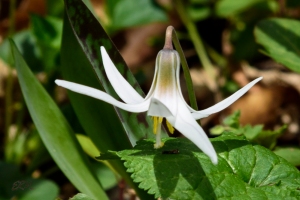 Review pictures in camera. Realize that the dead stems of last year’s asters are making funny vertical lines behind the lily. Carefully snap off dead stems. Take a few more pictures. Realize that the large dead oak leaf on the ground is reflecting light in a particularly annoying way. Move said oak leaf. Move a few others while you’re at it.

Take a few more pictures. Realize that the golden ragwort leaves popped up again and get them back down with a heavier stick. 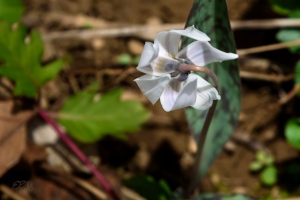 Re-establish self on ground and try some different angles. Realize that elbows are getting scraped and fetch bandana from daypack to use as cushion. Review pictures again and realize that with new angles come new bits of plant material causing odd lines and reflections and other composition-destroying things. Clear area and try again. Note that sun is back out and shoot like mad while you can.

Decide that you need to better isolate the subject from the background and start playing with aperture settings. Take series of pix from f/4 to f/8. Repeat from different angles.

Stand up and try to work kinks out of neck. Take pictures of something else to clear brain.

Go back to shooting trout lily.

Look at cell phone and realize forty minutes have passed since your first picture.

Take a few more pix of the other trout lilies just in case and carefully replace vines and dead oak leaves and remove sticks from golden ragwort leaves so as to leave no trace. 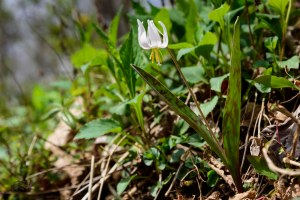 White trout lily (Erythronium albidum) is listed as S2/threatened in Maryland. USDA PLANTS, BONAP, and the Maryland Biodiversity Project all have different records of where in Maryland it can be found, but they all agree it’s in Montgomery County. I first spotted this patch in 2010, and though I’ve missed seeing the plants in bloom some years, I always visit to check on them.

Did I get the shot I wanted? Not really. But I had a lot of fun trying. 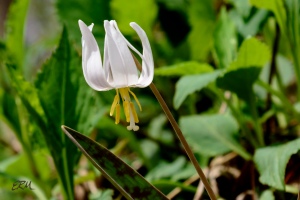