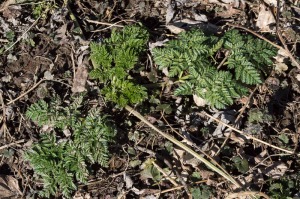 poison hemlock (Conium maculatum) is just a ground cover now, but will grow fast once the weather warms up; there’s some ground ivy in there, too

As a rule, if it’s green in winter it’s alien.  In this area.  Other than needled and broadleaf evergreens, of course.  Walking along the towpath and the Billy Goat trails, I see assorted grasses, garlic mustard, henbit, ground ivy, English ivy, lesser celandine, poison hemlock, perwinkle… but there are native forbs hiding somewhere (I mentioned some in an earlier post).

I’ve been searching for them on recent walks.  Since Flower of the Day is currently dormant, I’ll be posting about these quasi-evergreen plants during the month of February. 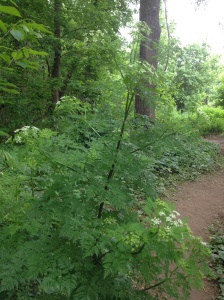 poison hemlock gets big, at least 7 feet; this one isn’t full-grown yet…

…but the flowers sure are pretty

Earlier this year I was over the moon to find two native orchids in the area, puttyroot (Aplectrum hyemale; fotd 5/20) and cranefly (Tipularia discolor, fotd 7/31).  These two plants have a similar, unusual life cycle: the new leaf (one per plant) emerges from the ground in autumn, persists through the winter, then dies back in spring (puttyroot) or early summer (cranefly); some time after that a single flower spike emerges, develops multiple buds, and blooms.

Last week while hiking I saw the new leaves of cranefly orchids; note the characteristic purple underside.  (Be assured no plants were harmed, nor soils disturbed, in the taking of these photos!) 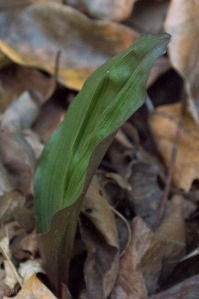 Of course I then had to go hunting for puttyroot, too, and found a few of those leaves, and seedpods still on one spike. 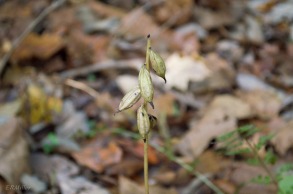 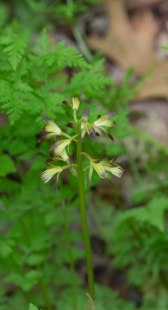 This really has been a wonderful year. 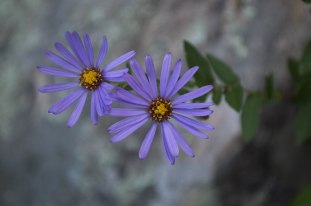 I’m running out of things to write about asters, but I’m not running out of asters. These are all smooth aster – I think.  They’re pretty, anyway.  Enjoy. 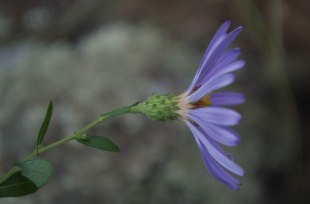 Some things to consider when trying to identify asters:

…you get the idea.  Actually this is a pretty general list, but with almost 90 species of Symphyotrichum found in the US (about two dozen in this area), you really have to pay attention to details.

All of which is to say, I’m not always sure I’ve correctly id’d all the asters I’ve been posting about.  But they sure are pretty. 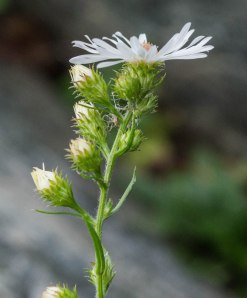 So far this year I’ve found 19 different species of aster (Symphyotrichum or Eurybia). I haven’t managed to identify them all, but they are clearly different from each other. This one, though, I’m pretty sure of.

Note the characteristically hairy stem in the photo to the right.

Frost aster is another native found in eastern North America (from Texas through Quebec). It grows up to three feet tall in full sun and moist to dry conditions.  I found this specimen growing out of the cracks along one of my favorite rocky bluffs upstream of Carderock.