The bright yellow fields of desert gold and yellowcups are eye-catching, but almost as common is a deep purple color that you almost have to be out of your car to see. Two species are responsible, both closely related: caltha-leaved phacelia and notch-leaved phacelia.

Something on the order of 167 native species of phacelia occur in the US and Canada. A few can be found in the east – including Miami mist and Coville’s; there are also species found in the South, or Mid-West, or north into Canada. But most phacelias seem to be found west of the Rocky Mountains.

According the the National Park Service, about six species are found in Death Valley. During my two and a half day jaunt I saw the two mentioned above, as well as a third: Fremont’s phacelia, which isn’t nearly as common or eye catching, but is wonderful in a belly flower sort of way.

Caltha-leaved phacelia (Phacelia calthifolia) gets its name (presumably) from the genus Caltha (marsh marigolds, among others), which is a name from the ancient Greek meaning “goblet”. The leaves are low to the ground, more-or-less round, and dark green.

The leaves of notch-leaved phacelia (Phacelia crenulata) are also dark green, but elongated and deeply indented:

Although the flowers of both species appear at first glance identical, the anthers of notch-leaved protrude well beyond the petals: 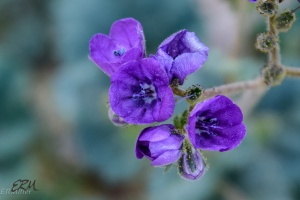 while caltha-leaved has a much tidier appearance:

I never saw these two species growing together. Nearby, maybe 20 yards apart, but not together. 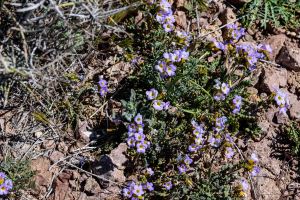 Fremont’s phacelia’s leaves are deeply notched, but quite different from notch-leaved, and there’s no mistaking the flower: it sits much closer to the ground than the other two species, and the flowers are a pleasing sky blue with yellow throats.

I found this third species at an elevation of about 5000′ above sea level, in the Dante’s View area.

Phacelias are in the Hydrophyllaceae, though some older references will place them in the Boraginaceae.