Here are a few of the showier, prettier, and more interesting wildflowers I saw in the Faroe Islands. Many of these have a worldwide distribution pattern known as arctic-alpine, which means exactly what you would expect: they are found at high latitudes, and at high elevation at lower latitudes. 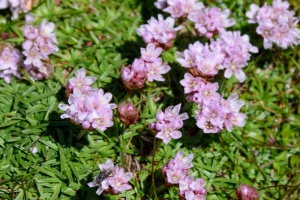 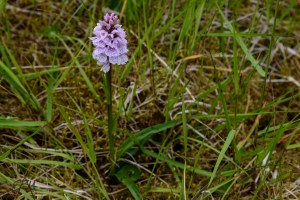 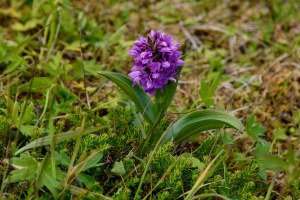 Dactylorhiza purpurella (northern marsh orchid; Orchidaceae)
these two Dactylorhiza species are difficult to distinguish and it’s quite possible that I’ve mis-identified them; also Dactylorhiza is one of those “problem” genera; found in the UK and Scandanavia 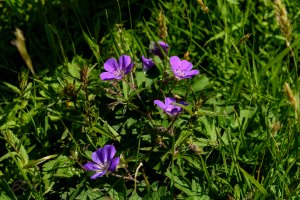 Pinguicula vulgaris (butterwort; Lentibulariaceae)
found in boggy areas in the upper Mid-West, New England, Canada, and northern Europe; the plant’s leaves produce both a sticky substance and enzymes which together trap and digest insects 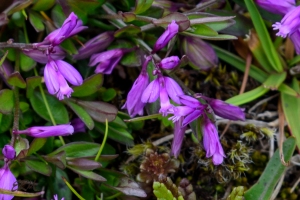 Polygala serpyllifolia (heath milkwort; Polygalaceae)
I can’t find much on where this species is found, other than the British Isles (and of course the Faroes)

Polygala vulgaris (common milkwort; Polygalaceae) this species has a widespread distribution in Europe and Asia; it’s introduced in Michigan and Oregon 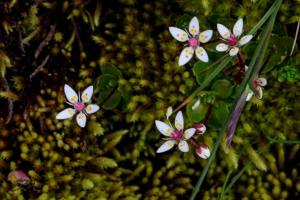 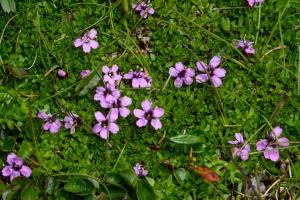 The genus Salix (willow) consists of about 400 species of woody plants (trees and shrubs) found in many of the temperate and colder regions of the northern hemisphere. How many of these are native to Iceland seems open to debate, with the answer depending in part on the definition of “native”. If “native” means before settlement, then there’s at least one, S. phylicifolia. Hörður Kristinsson in Flowering Plants and Ferns of Iceland claims that there are four native willows, but in the same book uses “native” to indicate “resident in Iceland for more than 300 years”. 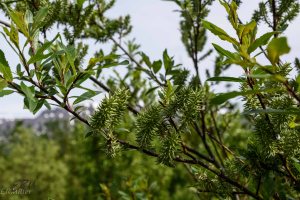 I’m not sure if this plant (right) is S. phylicifolia (tea-leaved willow) or S. myrsinifolia ssp. borealis (boreal willow). The latter species is a naturalized alien with limited distribution that does not include the region in which I found it (Ísafjorður). On the other hand, I didn’t find it “in the wild” – I found it in a cultivated parkland next to an area of summer houses surrounded by densely planted gardens. The limited information I have from this picture suggests boreal willow, despite the location. Or maybe it’s yet another species.

At any rate, tea-leaved willow is the only willow to form woodlands in Iceland. The other species shown below are hardly what you’d think of as shrubs and trees.

Take this one, for example: 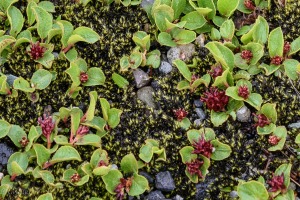 This is dwarf willow, Salix herbacea, which grows no more than eight inches tall. Despite the specific epithet, which means “herbaceous” (as opposed to woody), it’s considered a shrub. The stems are lignified and have a thin bark. It can be found in Fennoscandia, Russia, and North America (Greenland, parts of Canada, and a few New England states, where it’s either threatened or endangered).

All willow species are dioecious – that is, a single plant will have either male flowers or female flowers, but not both. In S. herbacea, the female flowers are red. The Icelandic name for it is grasvíðir, but it’s also called smjörlauf, which means “butter leaf”. Sheep love to graze on it. 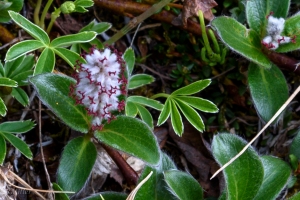 A little more shrub-like, and a little taller-growing (up to two feet), is the arctic willow, Salix arctica (left). The Icelandic name is grávíðir. Pictured here are female flowers.

Like dwarf willow, it can be found almost everywhere in Iceland. It can also be found in Russia, Fennoscandia, North America (Vermont and the Pacific Northwest), China, and… Madagascar?! This last entry had me chasing wild internet geese but I could find no explanation, only records that the species had been found there.

Starting to look more like what we think of as a shrub or tree, Salix lanata (woolly willow, right) can grow to over six feet tall. The Icelandic name is loðvíðir, and these are female flowers. Like the others, it grows all over Iceland as well as Fennoscandia and Russia. The Encyclopedia of Life provides links to records of it in North America, but it’s not listed in either BONAP or USDA PLANTS Database.

Fun bit of trivia: aspirin is acetylsalicylic acid, a compound created by adding an acetyl group (CH3CO) to salicylic acid, which was originally synthesized from salicin, a substance extracted from the bark of willow trees, for which it is named. Willow bark tea is an ancient analgesic, used in many parts of the world.