Enough has been written about Danaus plexippus on the internet (including here on my blog in previous years). Here are a few pictures I really like.

Once upon a time there was a genus of plants called Eupatorium. It was a large genus, lumping together plants commonly known as thoroughworts, bonesets, mistflowers, snakeroots, and joe-pye weeds. Roughly twenty years ago, the genus was split into twelve or more genera. Thoroughworts and bonesets are still Eupatoriums; mistflowers are now Conoclinium, and snakeroots Ageratina. Joe-pye weeds, those plants with large arrays of pink-purple flowers and whorled leaves, were placed in the new genus Eutrochium.

Historically, four of North America’s five Eutrochium species were found in Maryland, but one of them, E. maculatum (spotted joe-pye weed), has been extirpated. The other three are

Distinguishing these four species from one another is fairly straightforward, provided you can look at mature, flowering specimens. Here is a much abbreviated chart of some identifying characteristics, taken from the Flora of North America, with the most useful ones in bold purple:

When trying to identify plants in the field, remember to look at the totality of characteristics rather than focusing on one or two, because there can be so much variation from plant to plant. And also because you really shouldn’t be cutting into plant stems in the field, at least not in areas where plants are protected. 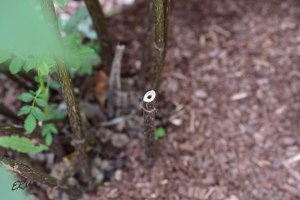 Here are a few pictures to illustrate. Keep in mind that these are garden plants; wild-growing specimens rarely look so lush and full. Also, the E. maculatum pictured in this post is not the species, but rather a cultivar (‘Gateway’). Still, it’s not too far off what a wild plant looks like. 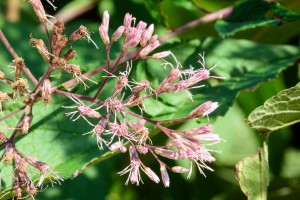 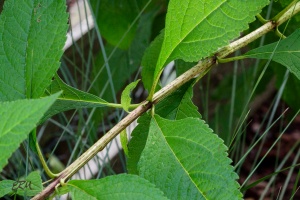 And here are a few of E. maculatum. It’s worth noting that further up on the stems, the leaves were in whorls of four (but I couldn’t get a good picture up there).

This picture from four years ago is probably of E. purpureum, though I was never able to get close enough for a confident ID. At any rate, it shows what a purple node looks like.

Of course none of this is what makes joe-pye so interesting. It’s those flowers. Unlike the aster I wrote about in the last post, joe-pyes have no ray florets – only disc florets. Each floret consists of five pointed petals, fused at the base, from which a single long style emerges. The cumulative effect of all those tiny flowers, from 4-24 per head, dozens of heads in each corymbiform inflorescence, up to a dozen inflorescences on each stem, often multiple stems from one plant… it’s just breathtaking.

And then there’s the icing on the cake: joe-pye weeds attract bees and butterflies like crazy.

More about this next time. 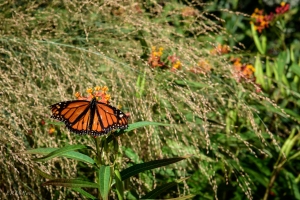 Ta-da!  Here it is, the current darling of conservation, the monarch butterfly (Danaus plexippus).  I promised a friend I’d write about them if I ever actually saw one.  So here you go, Cheryl, this post is for you!

This one was in the Smithsonian butterfly garden on the National Mall, feeding on butterfly milkweed (Asclepias tuberosa).

The monarch is easily mistaken for another butterfly, the viceroy.  The two look a lot alike; the major difference is a dark lateral stripe toward the rear of the viceroy’s hindwings.  I don’t have a picture to illustrate that but have a look at the Maryland Butterflies website.

I’m no entomologist so I’ll stick with a few basic facts.

There are two populations of monarchs, one east of the Rocky Mountains and one to the west.

Most of the eastern population overwinters in Mexico, though some will hibernate on the Gulf and southern Atlantic coasts.  Adults already in the tropics do not migrate.

Monarchs lay eggs on milkweeds (Asclepias species, and two other species in the Apocynaceae).  The caterpillars go through five instars before pupating and emerging as an adult butterfly.  The adults will feed on a variety of plants, including species in the aster, carrot, pea, and mustard families.

Monarchs will produce one to six broods during the summer.  Most of the butterflies live only a few weeks; it’s the last brood of the year that migrates south to overwinter, mate, and return north, laying eggs on the way.

The eastern population has declined by more than 90% since 1995, which is about one billion individuals.

The major threat to monarchs is habitat loss, which takes two forms: destruction of the forests in which the monarchs overwinter, and destruction of milkweeds, the sole larval host plant.  Milkweeds are considered nuisance plants by farmers and many homeowners.  Another threat – and another reason to hate invasive species – is the increasing presence of two species of Cynanchum, exotic alien plants that look like the native Cynanchum laeve (which is a larval host plant) but are poisonous to the larvae.

Other species of butterflies migrate, but the monarch is the only one that migrates both ways.

For more detailed information check out any of the following sites:
USDA Forest Service
Butterflies and Moths of North America
Monarch Watch
The Xerces Society