See that tangled mess of yellow and orange threads?  That’s dodder.  It is actually a flowering plant, but it’s an obligate parasite, meaning it depends on a host plant for survival.  Almost entirely lacking chlorophyll, the rootless and leafless stem emerges from the ground and finds a host plant to attach to, then wraps itself around the plant as it grows, penetrating the host in order to draw nutrition from it.  Later in the season it flowers and sets seed, then dies.

Dodder is native to most of the United States, but that doesn’t mean it isn’t a pest.  It’s a major problem for certain agricultural crops (cranberry and blueberry, among others), is a federally listed noxious weed, and is listed by thirteen states as noxious and/or prohibited and/or restricted and/or quarantined… you get the idea.  Look at these stems reaching out from the host plant!  (click on the image)

As a perpetually curious wildflower enthusiast I was a little excited to find it. On the other hand, I’m a little worried.  The greater Carderock-Marsden Tract area has enough problems from alien invasives without having to deal with dodder, too.

The name “dodder” comes from the Middle High German word for egg yolk.

Good info about dodder from the University of Massachusetts.

Neither a potato nor a man (though it is of the earth; see how useless common names are?),  this plant is related to sweet potato (Ipomoea batatas). It can be distinguished from other similar species in this area (3 native and six alien) by the purple throat.  This vining plant that can grow to 15 feel in length.  Roots can weigh up to 20 pounds and are supposedly edible, if they can be extracted from the earth.

Found throughout the eastern US and the prairie midwest, it is listed as threatened in Michigan and endangered in New York, but as a noxious weed in Arkansas and a prohibited noxious weed in Arizona.  It is closely related to both the pretty morning glories you planted around your mailbox and the annoying bindweed that grows through all your other garden plants. 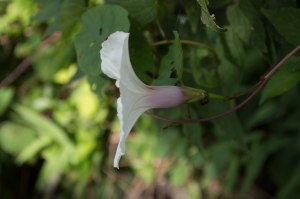