Plants in the Crassulaceae, or stonecrop family, are characterized in part by succulent leaves (crassus means “thick” in Latin).  About 1,400 species can be found throughout the northern hemisphere and in southern Africa. In Iceland there are five species (possibly a few more). I found three. 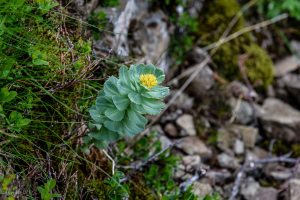 This is a real showstopper of a plant, growing up to a foot tall, with thick, pale leaves contrasting a tight cluster of bright yellow flowers. Although widespread in Iceland, it cannot withstand grazing by sheep, so it’s found only in areas sheep can’t reach. I only saw one specimen, growing at the base of a waterfall.

Roseroot stonecrop is native to North America, from Hudson Bay east into Greenland, as well as Fennoscandia and Russia. In the US it can be found in a few New England counties and in the mountains of North Carolina. There are about 50 species of Rhodiola worldwide; three can be found n the US, but none in Maryland. 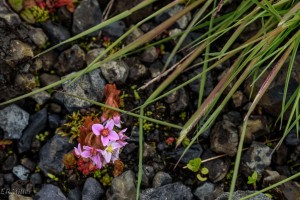 This species is native to Iceland, where it’s widely distributed, as well as Greenland, Canada, and Fennoscandia. It’s easily distinguished from the other Icelandic Sedum species by the pink flowers (the other species have yellow flowers). This picture doesn’t give a good sense of scale, but this is a belly flower. Those rocks next to the plant are thumbnail-size. 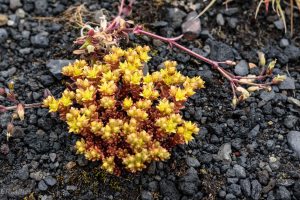 This species is not seen in the US or Canada, but is found in Greenland, Jan Mayen, and Fennoscandia. In Iceland it grows in the warmer areas in the south and east of the country, as well as some parts of the Westfjords, the Snæfellsnes peninsula, and the general area around Akureyri. Seen here, on black volcanic rubble at the snout end of a glacier, it’s quite striking. 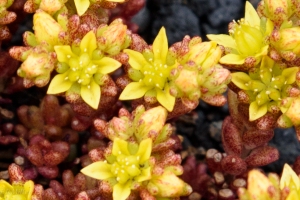 Neither of these Sedum species is found in Maryland; for similar plants you can look to Allegheny stonecrop and wild stonecrop. The latter is one of my all time favorites, so I’ll re-post a picture: 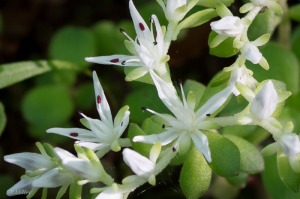 I don’t find them crass at all. 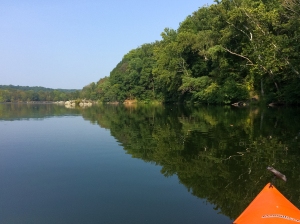 On a hazy September morning I took the kayak out onto the river at Old Angler’s Inn; the point was to enjoy the paddling and not hunt for wildflowers, for a change.  But when finished and heading back to the truck, I decided to do something I’ve been wanting to do for, oh, about 35 years, and put the kayak into the canal, and from there paddled upstream to Widewater.  (There are several places on the C&O called that, but this is the one opposite the Billy Goat A trail, just downstream from Great Falls.) 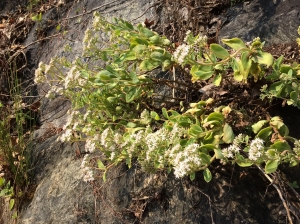 Once there, I had a lovely time exploring the rock formations on the far side, and the little islets in the middle of the lake.  And wouldn’t you know it, something caught my eye. From a distance it looked a lot like the masses of white Eupatoriums that were flowering, except shorter and pinker.  So I rowed over and thought “huh, a sedum.”  I gingerly unwrapped the iPhone and took a few quick snapshots. 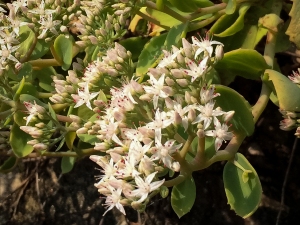 The Allegheny stonecrop is found scattered across the east coast from Georgia to New York and across the upper Midwest (and also Louisiana).  As you can see, it’s a sun-loving and rock-loving plant, with light green, succulent foliage and masses of pink to white flowers.  It’s threatened in Indiana and Kentucky, endangered in New York, and rare in Pennsylvania.

I spent way too many minutes trying to translate Hylotelephium.  The root hylo means “of the woods”.  I could find nothing about telephium other than it’s an ancient Greek name for a plant.  The root oides means “resembling”.  So I suppose this species name could be translated as “Telephium of the woods that looks like Telephium”.  I really wish I’d studied Latin in school. 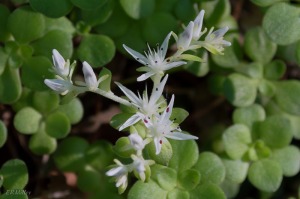 I’ve written about this plant before, but it’s a favorite and blooming now.  Wild stonecrop is native to Eastern US woodlands.  It likes to sprawl across rocks where there is a little bit of soil or leaf mould, and stands no more than eight inches tall. 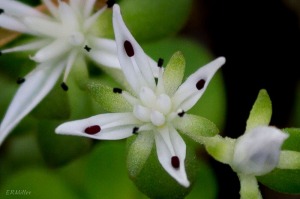 The inflorescence typically has about a dozen flowers on three branches.

This flower is about 1/4 inch across, and consists of four green sepals, four white petals, eight stamens with purplish anthers, and four pistils. 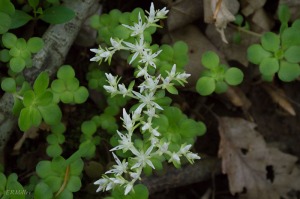 You can get a sense of scale from this picture (note the fallen leaf at the lower right).

This particular stand is under a tree alongside a very small stream near the base of a large rock formation.  The sun was just starting to peek over the rocks as I was taking these pictures.

I spent an hour there, in that one location.  Felt like 15 minutes. 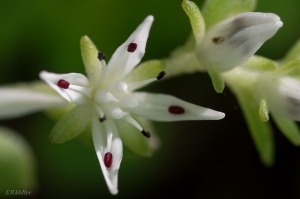 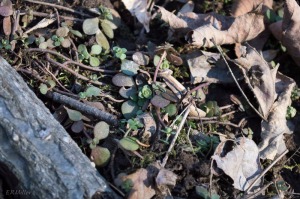 This very low-growing plant is actually a succulent (meaning it has fleshy leaves), a trait that’s found in plants (like cacti) growing in arid conditions. Succulent plants are not too common in the humid environment of the mid-Atlantic states.  And because the plant engages in Crassula Acid Metabolism (CAM), it’s quite drought resistant.

I’ve found two patches of wild stonecrop in the Great Falls – Carderock area; one of those patches is at the base of a tree, in deep shade, on a rocky slope that’s cleft by a seasonal streamlet.  I guess that while there’s water nearby, the area the stonecrop is growing in probably has very shallow and somewhat dry soil.  Talk about micro-habitats!

Wild stonecrop should start blooming around here in early May; here’s what it will look like: 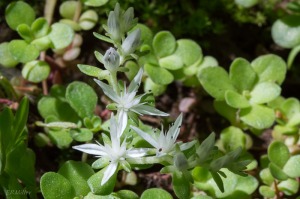