Another of the fantastically showy summer-blooming wildflowers is New York ironweed (Vernonia noveboracensis), a perennial that can grow to six feet tall given the right conditions: moist to wet soils and full sun.

[right: in my garden; below: on a bedrock terrace in the Potomac]
I find them growing along the banks of the Potomac River in the area downstream of Carderock. The species ranges from southern New England south into the mid-Atlantic and upper South, with a few populations a little into the mid-West, and a single county in northern New Mexico. There are records for it in every Maryland county. 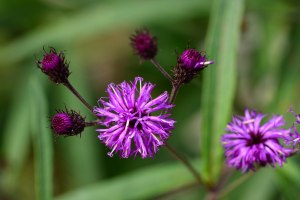 I’m drawn to this plant by the structure of the flowers. Despite being in the Asteraceae, the inflorescence has only disk flowers. If you look closely at a new head you’ll see them tightly bunched up, still unopened, surrounded by phyllaries (bracts at the base of the head).

In a head with open flowers, you can see the five petals fused into a tube, with a pair of curlique anthers on the stamen popping out. I’m not really sure if that’s a pair of anthers or a single split anther, actually. [edit: oops! that’s a stigma]

New York ironweed is great for attracting pollinators. I’ve seen several different species of butterflies and skippers on the one in my garden, as well as a variety of bees. Look closely at the top photo: there are at least eight skippers there. 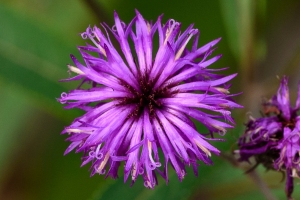 I’ve been trying for two weeks now to get some up-close, detailed shots of various flowers to write a post about plants currently and formerly classed in the genus Eupatorium.  With blue mistflower it’s fairly easy as there’s a nice clump growing in my garden.  But a skipper and a butterfly just wouldn’t leave the plants alone.  I’m not complaining; it was a good opportunity and a pleasant way to spend time on a lovely afternoon. 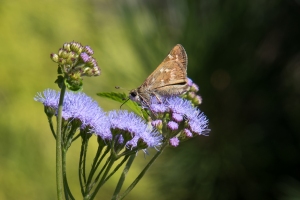 Blue mistflower is a common plant of partly sunny, wet places – you’ll see it frequently close to the banks of the Potomac, where it blooms from mid to late summer (at least). It can be found from Florida north to New York, east to Texas, and from there north to Nebraska.  It’s a nice native alternative to the similar-looking common garden plants known as ageratum, about which a plantsman at a botanic garden where I used to volunteer would always roll his eyes; he called them “droopy Maryland swamp plants”.  Don’t know where he got “droopy” from.  Anyway, they are growing so vigorously in my evergreen garden – which isn’t particularly wet – that I’m a bit worried they’ll become weeds.

Pickerel-weed is an emergent aquatic, so you’ll find it along shorelines, forming large colonies of four-foot tall plants that bloom from summer into autumn.

I’ve never seen it in the upper Potomac Gorge, but found masses of plants along the shores of the river downstream of Chain Bridge. 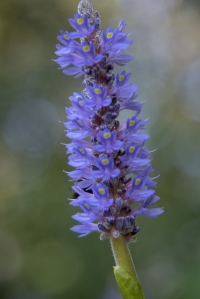 The flower spikes and heart-shaped leaves are typically about six inches long.

Pickerel-weed ranges from Texas to Minnesota and east (and is also found in Oregon and British Columbia).  It’s threatened in Kentucky yet considered weedy by some authorities.

By the way, pickerel-weed flowers are generally a blue-violet color.  All the pictures on this page (except for the colony) are of the same spike; I think some combination of shifting sunlight and camera position accounts for the apparent discrepancy in color.