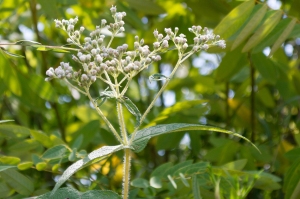 I’m not sure what compelled me to look closely at this particular cluster of tiny white fuzzy flowers.  They’re all over the place at this time of year, in the form of late-flowering thoroughwort and white snakeroot.  But for some reason I pulled the kayak up close to this one islet near Fletcher’s Cove, and there it was.

This was a big deal because I’ve never actually seen this plant, despite it being fairly common.  What sets it apart from the other Eupatoriums is the paired, clasping, opposite leaves that make it look like the stem is piercing a single leaf.

There’s nothing about the flowers to distinguish them from other bonesets or thoroughworts.

Boneset likes sun or a bit of shade and wet soils and is tolerant of flooding, so the rock outcrops near the banks of the Potomac are perfect habitat for it.  The native range is from Texas north into Manitoba and all the way east to the Atlantic.

The genus Eupatorium once contained hundreds or species, including (in this area) the various bonesets/thoroughworts, mistflowers, snakeroots, and joe-pye weeds.  Those last three have been moved to other genera, but that is a subject for another day.

…hey, what about the other white flowers in that picture?  Stay tuned!

The Eupatorium-type flowers aren’t quite done yet.  A. aromatica’s big brother, Ageratina altissima, dominates the scene – you can find them by the dozens along the Billy Goat trails – but tucked in little nooks on sandy soils you might find this small species, too.

As you can see, this is another one of the rayless composites, consisting only of disk flowers.  It’s found throughout the eastern US as far north as New York; some sources state that it ranges further into New England, but is rare or endangered there.